How Long Must I Wait?

The early hunter-gatherers were a brave lot. Or just very hungry. I've been watching the wild persimmons ever since I discovered them while spraying poison ivy. Since I'm not an early hunter-gatherer and have access to all kinds of advice via the internet, I'd surely be able to tell when these persimmons were ready to eat. Let's run through the checklist.

Color is orange. Check.
Fruit is soft and shriveled. Check.
There has been a frost. Check.

OK, should be good to eat. I plucked the most shriveled one I could find. I brought it in the house and showed it to the spouse (who declined to eat any). I removed the peel, which was thin and came off easily. I cut, or rather squished, off some of the pulp along with one of the large seeds. I put it in my mouth. Hey, this is sweet...not much other flavor though...ACK! Still very astringent close to the seed. Maybe I should have removed the seed first? I wasn't intending to eat the seed, BTW, I was going to spit it out after I got all the pulp off. I cannot begin to imagine how they would taste when they would appear to be ripe by the normal standards of, say, plums. 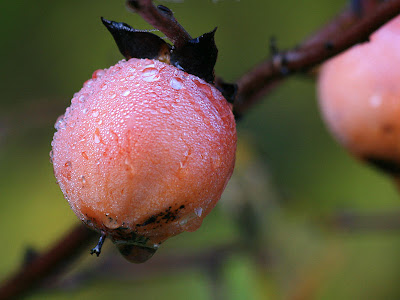 So I'll wait a little longer. Or maybe try cooking them instead of eating raw. I was disappointed in the flavor though - there wasn't much. Not enough to earn it the name of Diospyros virginiana, which roughly translates to "food of the gods from Virginia". I lifted that line from Wildman Steve Brill, the author of the article to which it is linked - he'll tell you almost everything you might want to know about persimmons. Not being a born Southerner I was unaware that Persimmon Pudding is a Thanksgiving and Christmas tradition. In fact I never heard of Persimmon Pudding until I found this website whose owner fills in everything else about persimmons that Steve Brill may have left out.

I do hope I learn to like these. It turns out that I have not a persimmon tree, but small persimmon grove with at least two small fruit-bearing trees and one much larger (male?) tree. 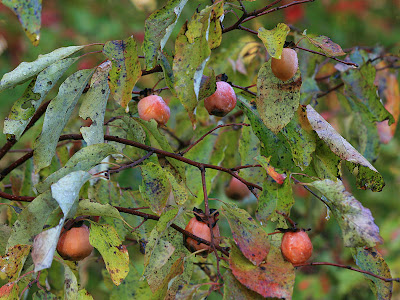 Saturday was such a cold, gray, windy day that I was sure we were going to have frost after dark when the skies cleared and the wind died down. The weather service disagreed and didn't issue a frost warning. I didn't believe them, so just before dark the spouse and I furiously picked peppers in case I was right and the weather service was wrong. I was wrong - they were right.

Sunday just didn't feel like the right kind of day for frost that night, but the weather service issued a freeze warning. Who to believe this time - them or my gut? My instincts were wrong on Saturday so maybe they'd be wrong Sunday too. My rational self sided with the weather service and picked most of the rest of the peppers in the garden Sunday afternoon. Was there frost? I don't know because I wasn't there. We'll have to wait until the weekend to see what happened. 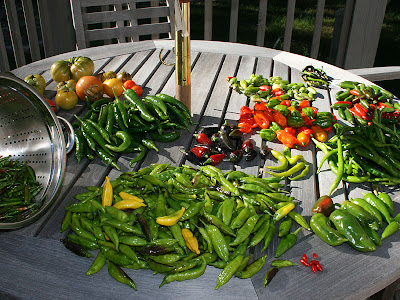 Now ordinarily, I'd be happy to have picked that many peppers. But see that big pile right in front, with just a few yellow peppers in it? That breaks my heart. Those are 'Lemon Drop' peppers - nicely hot and when they ripen to yellow they really do have a citrusy tang. But I got very few ripe ones this year in relation to the total number of peppers produced. I only had one plant and there were well over 100, maybe 200, green peppers left on it on Saturday. Just a few more warm sunny days would have ripened many of them...<sigh>...I didn't pick them all, just in case the weather service was wrong.

I didn't get many ripe peppers from the Thai pepper, Prik Ki Nue Rai, either. Those are in the colander at the left.

The majority of those peppers in the photo went into the freezer at Tangled Branches South. Good thing I divided my harvest between the freezers at our southern and northern locations, because we had a refrigerator disaster this morning at Tangled Branches North. I opened the fridge and found things strangely warm in there. Opened the freezer and found a drippy mess, including many bags of thawed chile peppers. I was too disheartened to try to think of something to do with them, and hopefully the other half will be enough for the winter. The repairman has come and gone - the circuit board had failed - damn computers...

Wild Orchids and Other Fairy Tales

Last weekend, I discovered a third species of orchid growing wild in the woods. Or should I say orchid foliage? Because that's all I've seen of them so far. 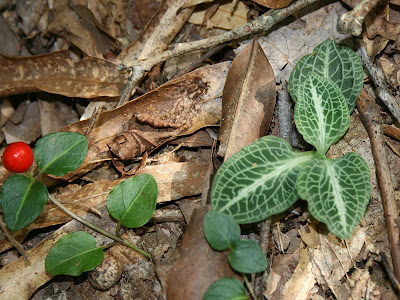 This one has foliage attractive enough to stand on its own even if it never flowers. I'm fairly sure it's Goodyeara pubescens aka Downy Rattlesnake Plantain, on the right next to Partridgeberry (Mitchella repens). I can't watch these every minute to see when they flower, although it might be fun to try. I don't think the the suspected Ladyslipper bloomed this year (but I may have missed it), and the Cranefly Orchid bloomed and was eaten before I got to see it. And this newly discovered one is said to bloom anytime from June to August, so it'll be a while before I can hope to see any flowers there. But I believe there will be flowers eventually.

A garden fairy tale dropped into my inbox this morning. I get weekly emails from Dover books with sample pages to download, and one of the books featured this week was Once Upon a Time...: A Treasury of Classic Fairy Tale Illustrations. This illustration intrigued me. 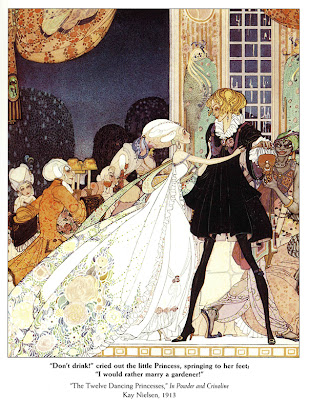 The caption reads "Don't drink!" cried out the little princess, springing to her feet; "I would rather marry a gardener!" I'd never heard of "The Twelve Dancing Princesses", but if it involves princesses marrying gardeners it must be a good story. You can read a version of it at SurLaLune, but in that version the hero is a soldier, not a gardener. Searching online, I found a snippet from the version for which our illustration was created. It originally appeared in a book titled In Powder and Crinoline by Sir Arthur Thomas Quiller-Couch, illustrated by Kay Nielsen. Some of the other stories appear to involve gardening too - "Felicia: or, The Pot of Pinks" and "The Czarina's Violet". Has anyone read this book? I don't know any of these fairy tales and I'd love to know more about the book. Continuing my search, I found that the gardener version of the story appeared in The Red Fairy Book by Andrew Lang, but the language isn't quite as poetic as the snippet from the Quiller-Couch book.

And staying with the subject of fantasy, another Kay Nielsen illustration from the Quiller-Couch book looks just like fantasy me standing in front of my fantasy cottage in my fantasy garden. Well...maybe there would be fewer cabbages...

The middle of October. Got your pumpkins yet? And time once again for Garden Bloggers' Bloom Day, dreamed up by Carol at May Dreams Gardens.

Flowers are ever more sparse here at Tangled Branches North, but a few stalwarts are still going strong:
Self-sown Cupheas 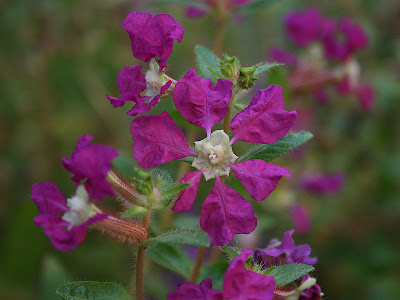 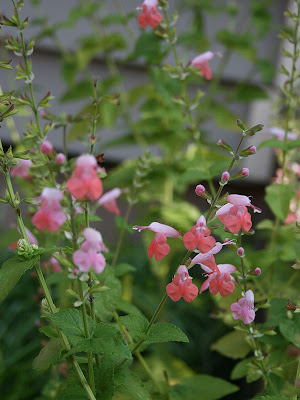 Is there a pattern here? Or better yet, is there a lesson here? Perhaps if I want annuals that still look good in October, it would be best to start them later? 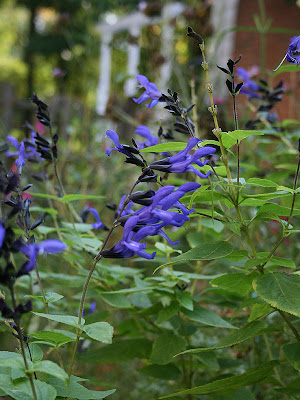 S. guaranitica 'Black and Blue' is blooming profusely, maybe more than it has all summer. S. farinacea 'Evolution' is an iffy perennial for me, but it's still looking good too.

I think that's about it. I'm shifting out of flower mode and into fall foliage mode. The grand finale is beginning. 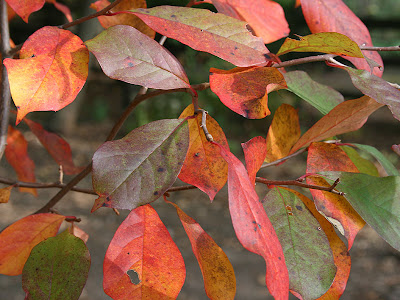 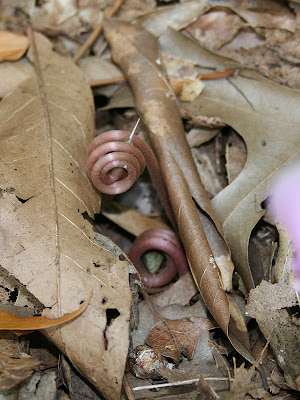 This is in the midst of my tiny patch of Cyclamen hederifolium. At first glance, I assumed these were more flowers emerging. Not so. This plant neatly cleans up after itself. When the flowers have finished their work, the remaining seed pod rolls itself up in the flower scape and tucks itself back into the leaf litter. I need more plants like this.

But I can't help but think of snakes. 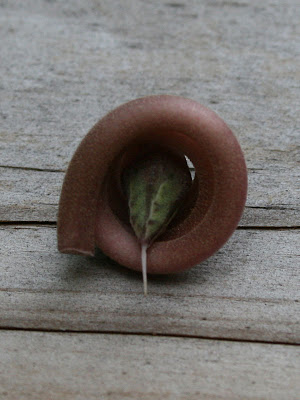 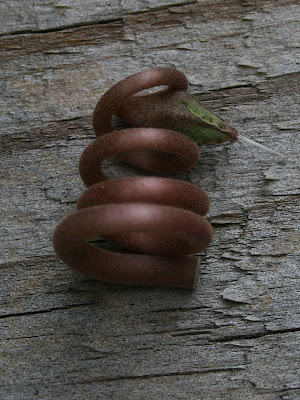 I didn't get around to posting anything about the cyclamen flowers this year, but here's a picture from a few weeks ago. 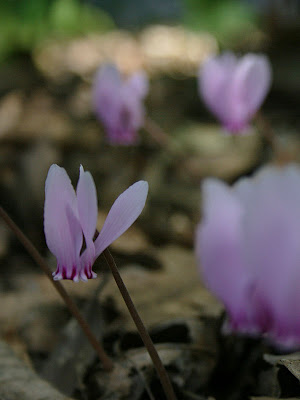 A few pictures from the central Virgnia woods last week. I was startled to see a Vaccinium in bloom. I believe this is a deerberry (Vaccinium stamineum) and it normally blooms in late April or early May. We have several wild Vacciniums in the woods and although I've seen berries on some of them I've never seen a deerberry berry. 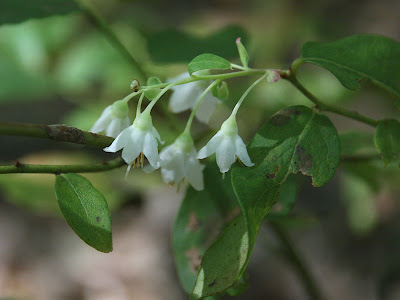 I never posted an update on the Cranefly Orchid I discovered last winter. I did look for the flowers in July (or was it August?), and found instead the stump of a chewed-off flower stalk. But the leaves are sprouting again and there may be even more of them than I saw last year. Here's one emerging leaf: 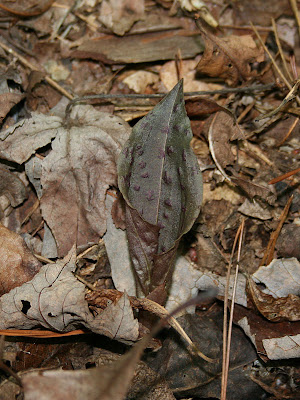 With the recent rain, the mushrooms are sprouting like...oh never mind. I have no idea what any of these are, but some of them are attractive and that's fine because all I intend to do is look at them.

And lastly, this is the biggest Partridgeberry I've ever seen. Where are the partridges? 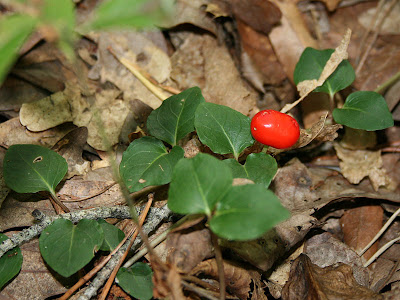 Sounds like the title of a very dry scientific paper. 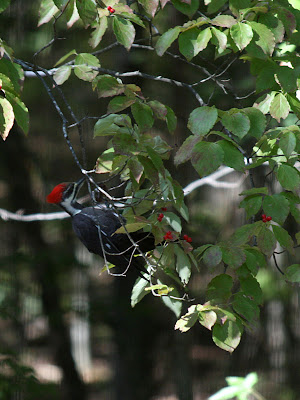 I didn't know that Pileated Woodpeckers like dogwood berries.

We Still Have Hummingbirds

One of these days, I'm going to take a feather-perfect picture of a hummingbird. For now these are the least bad photos from yesterday afternoon. 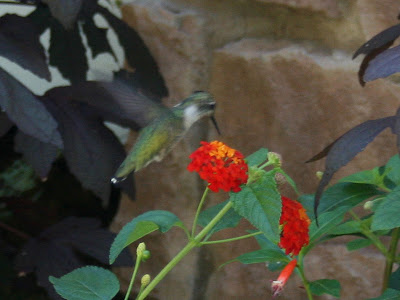 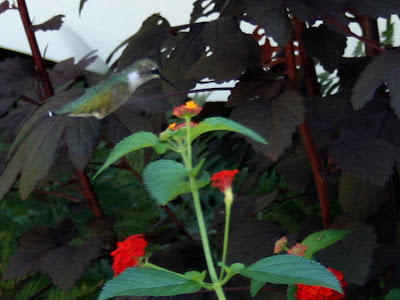 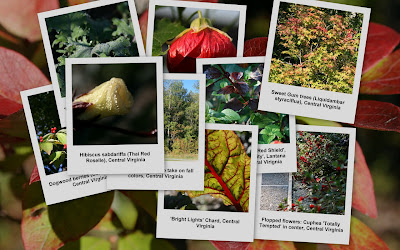 With special emphasis on the Malvaceae family.

Three malvaceous plants - new to the garden this year - will all be invited back next year.

Hibiscus acetosella 'Red Shield' is a very vigorous foliage plant with medium-red leaves. It topped out around 6 or 7 feet in a moist soil and afternoon shade, but is a more manageable 5 feet up close to the house. And these were plants started indoors from seed this spring. It responds well to pinching and pruning, rapidly growing side shoots. I like the leaf color - it's not so dark that it makes a black hole in the landscape, but dark enough for contrast. I especially liked it next to the 'Dallas Red' Lantana' and various Cupheas, including 'David Verity' shown here. 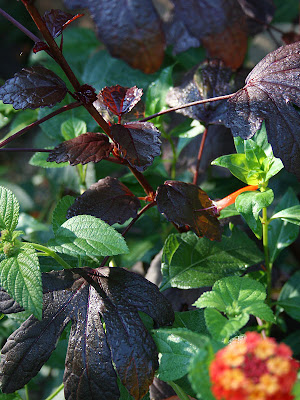 Abutilon 'Voodoo' has such attractive flowers that I'd probably buy it again even if it doesn't prove hardy here. What's that? It might be hardy here? Good question. I bought this one locally and the plastic label said "hardy to zone 7". I assumed it was a mistake. But Plant Delights is offering it and they have some astonishing things to say about how much cold it can stand: “Not only did it continue flowering into the upper 20s, but it kept green stems and leaves down to 20 degrees F”. Very interesting. I'm going to leave it outside all winter and see what happens. I'd always thought of Abutilons as annuals or houseplants. 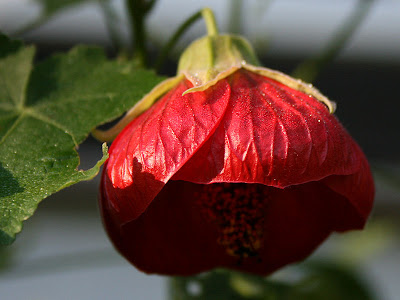 I've already gone on at some length about Hibiscus sabdariffa, but I wanted to brag here about the jam I made from it. I made it on Monday and by Friday I've become addicted to it. I think I'll have enough calyces to make another batch or two this season - I sure hope so anyway. Four plants is plenty, but I still want more. 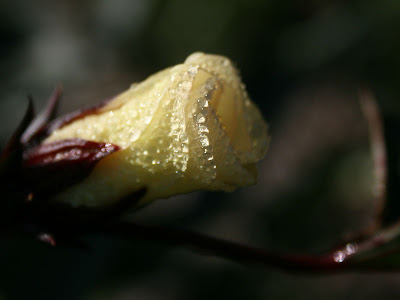