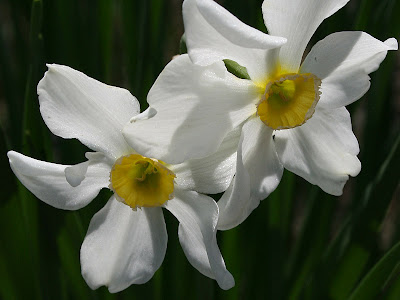 All I really wanted to know was the name of this daffodil. In the spring of 2007, I was surprised and happy to find wild daffodils blooming at Tangled Branches South, but presumed their identity was lost to time. Later that year, while browsing Brent and Becky's bulb catalog, I came across Narcissus x medioluteus. Hmm...could that be it? So I ordered some to plant and compare. What with one thing and another, they didn't get planted until early 2008 and didn't bloom that year. This year, they opened up about a week ago and then the heat wave finished them early, and yes, they look much the same as my wild daffodils. 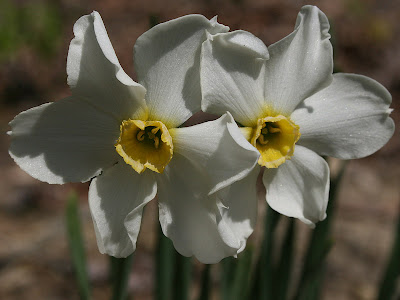 Most of the references I've found on the internet state that Narcissus x medioluteus is a naturally occurring hybrid between Narcissus tazetta and Narcissus poeticus. My wild daffodils are the top photo and the ones from Brent and Becky are above this sentence. To my eyes, the wild flowers have a more elongated petal and a slightly larger cup and look more like N. poeticus, while the purchased bulbs look more like N. tazetta (aka Paperwhites) with their smaller and rounder petals. I wonder if some plants of this natural hybrid look more like one parent than the other? Did the cross-breeding occur more than once? Still, I'm prepared to call them all Narcissus x medioluteus. But that's such a mouthful, and I've learned they go by other names. In England, they've been known as Primrose Peerless for hundreds of years. Here in the US South they seem to be most often known as Twin Sisters, but also as Cemetery Ladies because they were often planted there and are still blooming in many.

This last bit of information I learned from Sara Van Beck in A Token of Remembrance—Daffodils in Cemeteries, published in Magnolia, the journal of the Southern Garden History Society. And that set me off on a long internet journey which prevented me from writing this up because I was so distracted by the many interesting items I found. So before this topic is totally past its post-by date, I'm going to cut this post short and just leave you with a few links.

More from Sara Van Beck about antique daffodils in the South: Daffodils in Early Southern Gardens

Botanical illustration from one of my favorite web sites in which to lose all track of time: Narcissus biflorus in Les Liliacées by Redouté. I'm not sure when this particular volume was published. Let's call it early 1800s.

Herbarium specimen from England. This and the illustration above look more like the bulbs I bought from Brent & Becky, and less like the wild ones growing here. The petals are more rounded and regular and the cup is smaller.

Lastly, it's too late to see the daffodils this year, but the Lynchburg Old City Cemetery has been lately replanted with antique varieties of plants. Sounds like a good road trip for next spring.

This post has been removed by a blog administrator.