Better late than never. I planned to post this a few months ago, when the tomato season of 2008 was fresh in my mind but stuff happened. I didn't get it done. Now I'm making out my seed orders for 2009 and thought a review might be helpful. In 2008, I grew one plant each of 10 tomato varieties - some of them old favorites and some newcomers.

First the old favorites:
Striped Roman (aka Speckled Roman) - A long, paste-type tomato. Red skin with yellow streaks. Deep pink-red flesh, very solid, with wonderful flavor. Even though the fruit is susceptible to blossom-end rot, I'll always grow this. (Unless I discover something with better flavor, which is hard to imagine.)

Black Russian - A medium-size tomato of the black/brown/purple color family. I love this one for it's deep rich essence-of-tomato flavor. And I hate it because I lose so many fruits to cracking and rotting. I'd love to have this flavor in a tomato that doesn't crack. I'm still searching. Anyway, 2008's crop disappointed me in two ways. First, the tomatoes turned out pink, not black. The seeds were from the same packet I've been using for several years, so I assume this particular plant was an oddball. Second, the yield was very low, even without the cracking and rotting. Still, I plan to grow this again in 2009, for reference if nothing else.

The newcomers:
Mortgage Lifter Improved - This is supposedly Mortgage Lifter with improved disease resistance. I didn't have any particular problems with disease in this tomato, so maybe that's true. It produced a nice yield of large beefsteak-type tomatoes. I thought it was just OK, flavor-wise, but with a persistent tobacco aftertaste to it. I don't plant to grow this again.

German Johnson - A very large pink-red beefsteak type on a potato leaf plant. Wonderful flavor, but I had a lot of cat-facing and sunscald on this. I can grow it unstaked and unpruned to help prevent sunscald, and I can ignore the cat-facing (and just not show it to anybody else). I loved the flavor, so German Johnson will be back for 2009.


Black Prince - Another of the black/brown/purple ones. This one was maybe a little sweeter than Black Russian, but I couldn't compare directly in 2008 because of my oddball Black Russian plant. It's smaller than Black Russian and I didn't have too much trouble with cracking and rotting. I'll probably grow this again in 2009.

Piriform - I wish I had taken a picture of some of these before slicing. A medium-size red tomato of strange shape; almost looks like a tomato that's sagged - heavy and rounded at the bottom and ridged at the top. Piriform means pear-shaped, in case you didn't know. This one had green shoulders when ripe, and the green shoulders were sugar-sweet. I liked it well enough and will probably grow it again unless I'm short on space.


Persimmon - The beauty contest winner for the year. I didn't get many tomatoes from this one, but the few I got were just beautiful. The flavor was average; we liked them in BLTs and this is one of the best slicing tomatoes (great for sandwiches) I've ever grown. It's probably going to be crowded off the list for 2009, just because there are so many others I'd like to try.
Update 27 February 2009: I have reason to believe that the tomato I grew may not be the same 'Persimmon' offered elsewhere. Explanation here.


Principe Borghese - Small egg-shaped red tomatoes. Supposed to be THE tomato for sun-dried tomatoes. I dried most of the yield from last year, but haven't tried cooking with them yet because I keep eating them as snacks. Makes me wonder if I really need to have any dried tomatoes on hand. I did get a lot of tomatoes from one plant, and 2008 was a difficult, droughty year. Still thinking about whether to plant this one in 2009.

Matt's Wild Cherry - I'm wild about Matt's Wild Cherry! This is the only cherry tomato I've willingly eaten after the big tomatoes have started to ripen. Usually I lose interest in the cherry tomatoes as soon as I can have the big ones, but not last year. The tomatoes were tiny bursts of tangy flavor with just a hint of sugar. Smaller than most cherry tomatoes these days, but larger than a currant tomato. Will definitely grow this again and again.

So there it is. Looking over my list, I only see about 3 open slots, and I've already ordered seeds for 4 new varieties. Maybe I'll squeeze in a couple extra plants this year...

PS. I just looked at my 2007 tomato review and found that I wrote almost the same thing about Black Russian then as now - "essence of tomato". I need a thesaurus.

On time and with real flowers. 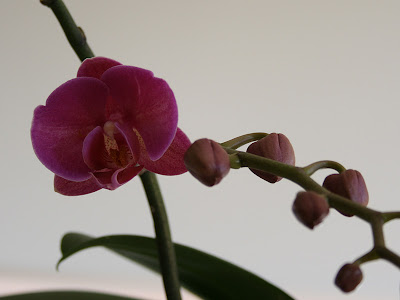 This Phalaenopis orchid opened its first flower just in time for Garden Bloggers' Bloom Day. It's a rebloom from a plant I bought last winter, so I count this as one of *my* flowers, not belonging anymore to the greenhouse grower who produced it.

OK, that's it for the real flowers. Outdoors there are proto-flowers, or at least there were yesterday. 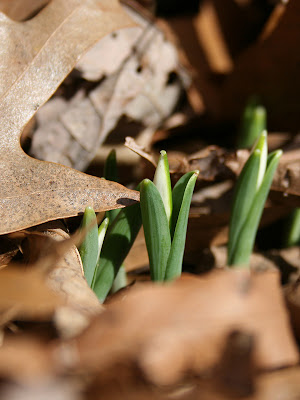 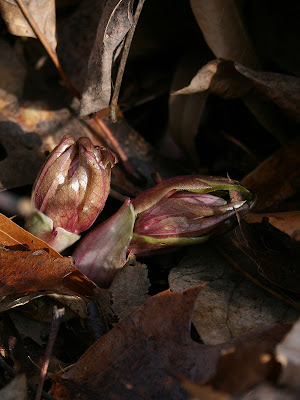 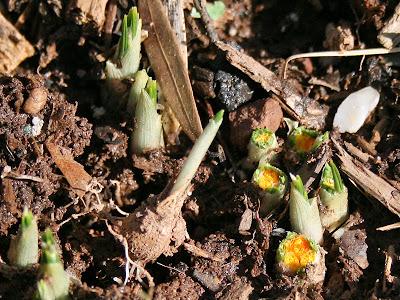 I suspect all these will be gone soon. We're expecting the coldest weather of the season and some of the coldest weather we ever get here: a low of 5F overnight on Friday. I covered up the snowdrops and hellebores with leaves, but the crocus are on their own. You can see the frost-heaved bulbs in the picture - I would have pushed them back in but the ground was frozen. 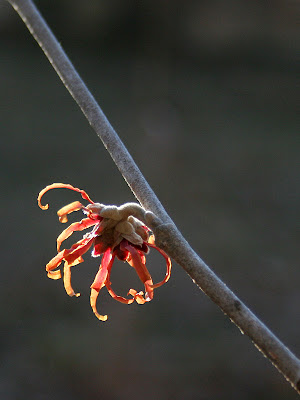 Hamamelis 'Jelena', newly planted last spring, has rewarded me with her first flower. I'm guessing this particular cluster won't survive the upcoming cold weather, but there are several more buds. Right now this is a tiny two-foot tall proto-tree, but wearing my gardener's glasses I see it as a blaze of midwinter color.

If your gardener's glasses aren't working, you can stock up on vicarious mid-winter color by visiting May Dreams Gardens and checking out all the Garden Bloggers' Bloom Day posts.

PS. Looking back at last January's GBBD post, I see the snowdrops were blooming nicely then.

Is there one genuine lover of flowers, and of success with them, who does not feel a thrill as of fresh life (fresh sap?) at the thought that those beloved helpers and deceivers are once more at hand? The thought is almost as sweet as that of maple sugar time at hand is to the genuine lover of sugar on snow! Bless the catalogues! we love them even when they are culpably and speciously coaxing the shekels from our leanest purses. Who can take from us the joy of anticipation which they give us?
American Gardening Magazine 1898

I found that gem while lost in the Internet. I was searching for historical information to supplement my latest post over at Tangled Branches: Inherited and got totally absorbed in a couple of ads I found in the January 10, 1895 edition of The Ohio Democrat, published in New Philadelphia, Ohio.

One was a mail-order nursery called Evergreen Nursery in Evergreen, Wisconsin. I thought it'd be interesting to see if I could dig up any information about this outfit and - would you believe? - it's still in business. They're no longer in retail, but they were a large enough enterprise in the the late 1890s to have their own Post Office.

But the ad that took me on a long surfing expediton was this one. The Standard Cyclopedia of Horticulture by Liberty Hyde Bailey

There are at least two volumes of American Gardening available on Google Books - 1897 and 1898. If you find more, please let me know - going through the search results "American Gardening" is a time-consuming process.

L. H. Bailey states that the magazine was edited by Leonard Barron after he, Bailey, left in 1893. Now Barron is a name that's still prominent in publishing, so I wondered if there was a connection. I didn't find one, but I did find that Leonard Barron went on to author and edit many more horticultural books and magazines, including The Garden By 1920, I recognize a few of the advertisers and some that are still in business - John Scheepers and Harris Seeds are two examples. An ad that caught my eye read "From Old Virginia, A Garden Books That's Different". The Williams Seed Company was offering a "valuable gardening information book" free while supplies last. Louise Beebe Wilder's latest book (Colour in My Garden) was advertised. I have one of her later books - The Fragrant Path, republished by Dover Books as The Fragrant Garden.

I don't know where to end this post - I could go on and on about old publications. Reading through them always gives me the feeling that our predecessors were better gardeners than we are. But I suppose I could end the post where it started - thinking about the winter catalog season and how it really hasn't changed much in over 100 years. The Smithsonian Institution has an online exhibit of 500 images from 258 old seed and nursery catalogs, including this 1899 offering of Salzer's Oddly Odd Gourds. Have fun getting lost!

I finally got my Pine Siskins. Everybody else has been seeing them for weeks now, and I had never seen one ever. I filled the feeders at Tangled Branches South yesterday after a two week absence and had customers within an hour or two. If there were Siskins there yesterday I didn't see them, but this morning I looked out at the usual Goldfinches and ... hey, those aren't Goldfinches. 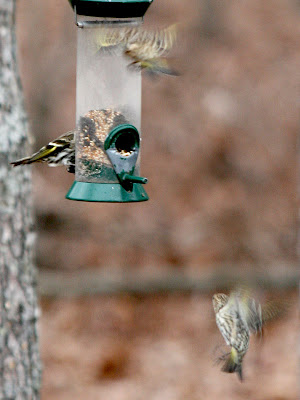 At a casual glance out the window the Siskins look a lot like Goldfinches. But looking more closely, you first notice the streaks, then the yellow in the wings, and if you're very observant, the sharp pointy beak. But they park themselves on the feeder and chow down just like their Goldfinch cousins. 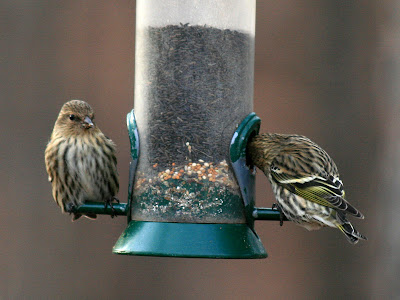 You may notice that the feeder is the same in both photos but the food in the tube is different. That's because they emptied the feeder early in the day, which had been filled with a mix of "finch food" and Niger seed. They emptied the feeder, but they didn't eat the "finch food" - just tossed it out on the ground (where the juncos will happily eat it). So I refilled with Niger seed only.

If they stay around, I'm going to need a bigger feeder...like this one (third photo, scroll down).

And while I was on the way out to try for a photo of the Siskins, this Eastern Bluebird stopped by to see what I was doing. He wouldn't turn around to show the pretty blue side until he flew away. 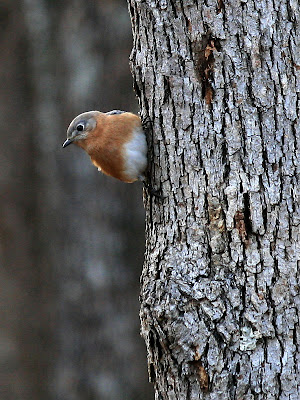