Persimmon or Not Persimmon

I need to amend my 2008 Tomato Review. It's come to my attention that there are at least two tomatoes calling themselves 'Persimmon'. MSS at Zanthan Gardens is trying to decide which tomatoes to grow this spring. She grew 'Persimmon' in the past and loved it. I grew it and thought it was OK. But now I think we're comparing two different tomatoes.

First clue: photographic evidence. I've shown the same photo of my 'Persimmon' twice already, so here's a different one. 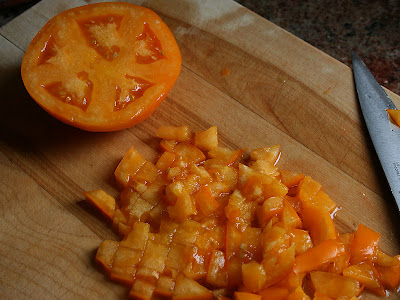 This is a medium-large tomato with fairly symmetrical seed chambers. MSS's 'Persimmon' is much larger with a beefsteak-type arrangement of seed chambers.

Well, let's just Google it and then have a cup of tea. I think I found the answer at idigmygarden.com forums (sponsored by Baker Creek Heirloom Seeds).

mrtomatoexpres has the beefsteak-type 'Persimmon'; blu bastian has the kind I grew.

blu bastian wondered what was up with that. Nobody answered that I could see.

Looking at the Seed Savers Exchange 2009 Yearbook, searchable online, the growers' descriptions of 'Persimmon' are quite varied.

Tatiana's TomatoBase and Hanna of This Garden is Illegal both say that 'Persimmon' is a beefsteak tomato.

But Tatiana's TomatoBase shows 'Russian Persimmon' very similar to what I grew and does not categorize it as a beefsteak tomato. Almost all the Seed Savers Exchange Yearbook growers say that 'Russian Persimmon' is high-yielding, but the plant I grew was not.

For the record, I grew one plant of 'Persimmon' from seed purchased in 2008 from Territorial Seed Company, and the fruit I got looks like the photo on their web site. The text, however, describes it as a beefsteak tomato.

So there you have it. I don't really know what I grew. Where's the teapot?

Well, I was expecting to have more crocuses to show you and they're very close to opening, and may open as soon as this afternoon, BUT they weren't open when I went outside with the camera. So how about an Iris and a Winter Aconite? 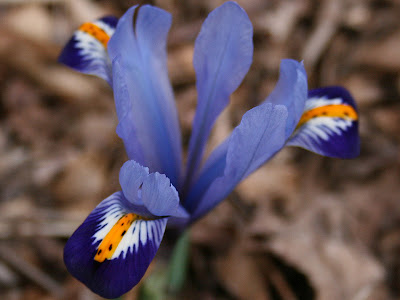 Isn't this pretty? Iris reticulata 'Gordon' is new to the garden this year. I've had trouble keeping dwarf Irises going, but I have high hopes for this one. It's a two-fer, in my view - the penetrating periwinkle blue shows up very well against the leaf litter, even from a distance, and when you get close, you can appreciate the intricacy of the multicolor lower petals. In fact, I'm so smitten with this flower, I'm going to go right out after I post this and snip it off to bring indoors.

Make new friends, but keep the old, one is silver and the other's gold.

Winter Aconite is more yellow than gold, but is an old friend. This little clump has been faithfully chasing away winter for many years. 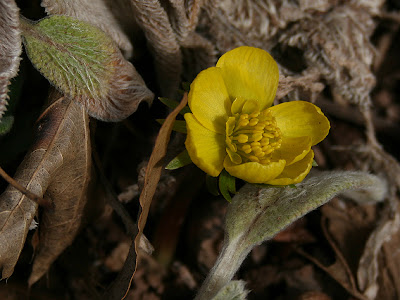 I always thought this was Eranthis hyemalis, but now wonder if it isn't Eranthis cilicica. And look, here's a picture of Eranthis cilicica blooming next to what appears to be Iris reticulata. If there are any experts reading this who can tell me how to distinguish E. hyemalis from E. cilicica, I'd be very grateful.

The crocus and snowdrops I showed you earlier this month are still blooming, as is the indoor Phalaenopsis orchid. Galanthus nivalis (the other snowdrop) is just starting to open, but my camera battery died while I was transferring the photos to the computer. I'll post another picture in a few days when the flowers have opened up more. Hellebores are finally raising their heads, but we're expecting cold weather this week, so probably no flowers for several more days.

That's it for Tangled Branches North on this Bloom Day plus one.

From small to large (in terms of plant size), we have five plants in bloom at Tangled Branches South. 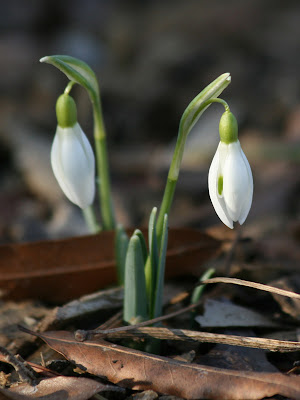 Next smallest: a weed. Hoary Bittercress is a perfect name for the first blooming weed of the season, I think. Its botanical name is Cardamine hirsuta. If you look closely, you can see developing seed pods on it already. 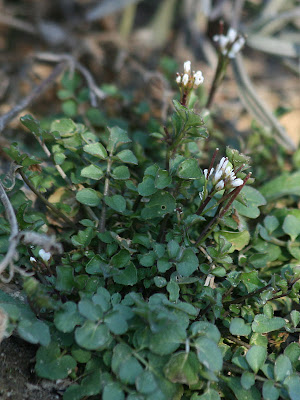 In the middle, the biggest and brightest flower of the lot, 'Rijnveld's Early Sensation' daffodil. 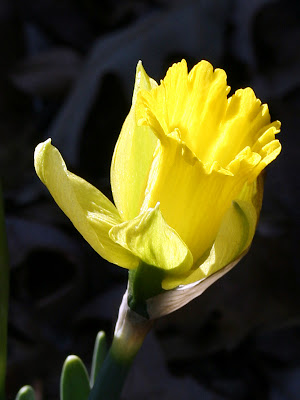 The second-largest plant is my latest infatuation, Hamamelis (Witch Hazel) 'Jelena'. Imagine a whole tree covered in these multi-colored pompoms. You'll have to imagine because right now this tree is in its infancy. I hope to have it for a long time, watching it become more beautiful every year. 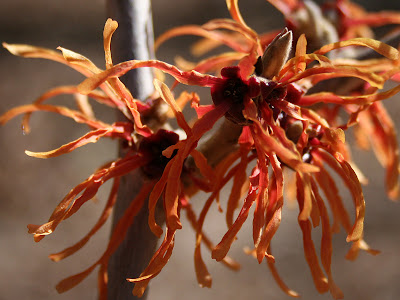 And lastly, way up in the sky, the red maples are blooming. I thought I was just taking pictures of flower buds, but when I transferred them to the computer, I noticed the flowers have started to open. 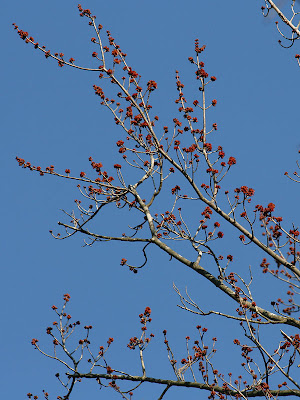 Stop by Carol's to see the other Bloom Day posts and wish her a happy second Bloom Day anniversary.

PS. You must see the flower arrangement we saw yesterday at lunch. Can Can Brasserie in Richmond, VA had at least two of these huge vases filled with bright red amaryllis stems. Crummy cell phone photo, but you get the idea. 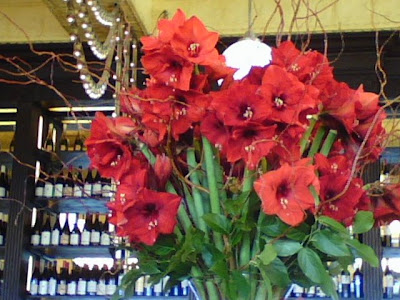 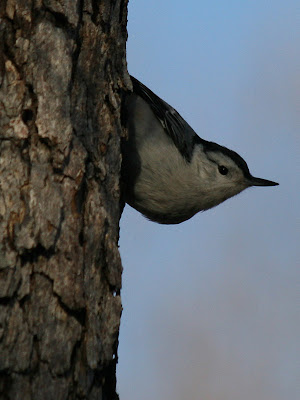 There's still time to count and report your backyard birds to the Great Backyard Bird Count, if you haven't yet. Most of today's birds were the usual suspects (like the White-breasted Nuthatch above), but a few Pine Siskins are still here, and a Yellow-rumped Warbler was lurking nearby. 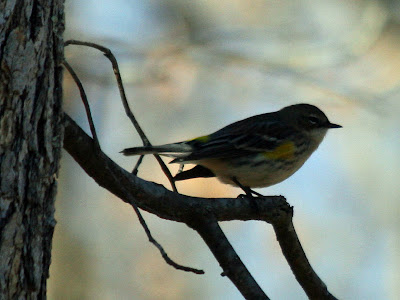 Not a great photo, but good enough to prove I didn't make it up.

Next in the lineup of spring bulbs, and just beginning to bloom yesterday, is Crocus ancyrensis 'Golden Bunch'. I'm probably repeating myself, but will say again, these flowers are small but powerful. The color, such a rich bright gold, makes up for the lack of size. And you could always plant a million or so if you want a larger impact. 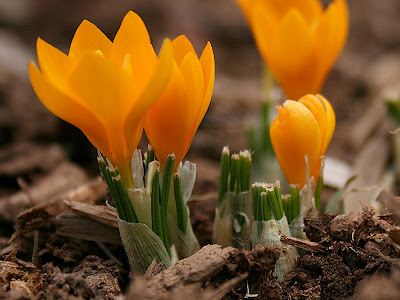 They look almost triumphant here, surviving a late-winter nibble by some critter and lighting up their surroundings so early in the season.

Kicking off the season of spring bulbs. A bit late this year, but January was the 18th coldest on record. 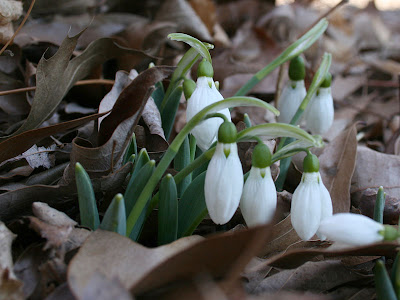 AT DULLES...THE JANUARY 2009 AVERAGE MONTHLY TEMPERATURE WAS BELOW NORMAL...THE 18TH COLDEST ON RECORD...AND THE COLDEST JANUARY SINCE 2004. 18 OUT OF 31 DAYS THIS JANUARY AVERAGED BELOW NORMAL.

THE MINIMUM TEMPERATURE OF ZERO DEG F ON THE 17TH WAS THE LOWEST MIN TEMPERATURE RECORDED AT DULLES SINCE FEB 6 1996 WHEN IT WAS -9 DEGF.

THE 19TH WAS THE ONLY DAY WITH MEASURABLE SNOWFALL FOR THE MONTH. THE SNOW TOTAL OF 2.0 INCHES WAS OVER 6 INCHES BELOW NORMAL. OVERALL THIS IS THE 9TH JANUARY IN A ROW WITH BELOW NORMAL SNOWFALL.