Things I Never Saw Before

Lately, I've been thinking this blog might be getting a bit stale. You know... repetitive, undifferentiated ........ boring. 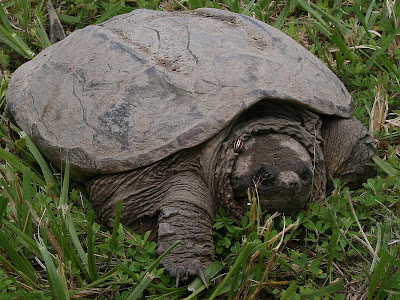 Then, out of nowhere, nature conspires to shake me out of my doldrums. I was walking toward the vegetable garden with tools in my hands when I saw something not quite right. There seemed to be a lump of dirt...moving. Gee, that looks like a big turtle. Back I ran to the house to drop the garden tools and pick up the camera. It is a big turtle. I would guess the shell was 10 to 12 inches long. 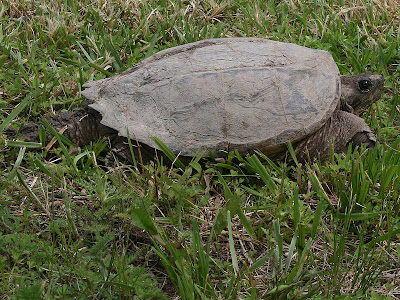 Apparently an Eastern Snapping Turtle. That's the closest match I could find on the Turtles of Virginia page at the Virginia Herpetological Society website. I had never seen one before and was surprised because I assumed they were exclusively pond dwellers. Last I saw it, it was headed for our tiny little stream.

The next day I heard, then saw an Eastern Meadowlark. 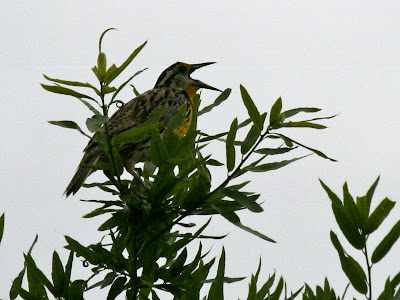 A beautifully patterned bird, with a pretty (loud) song. And I had never seen one before.

Earlier, I found this moth with an odd bat-faced look. 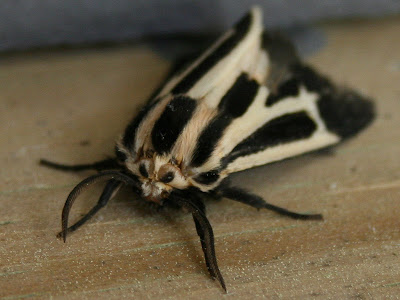 Moth Update, June 5: It's been raining steadily since I got up this morning, so I had time to try to identify the moth today. I think it's a Harnessed Tiger Moth (Apantesis phalerata). There are several species of Tiger Moths, but the black spots which appear to be eyes (and are not) are a distinguishing mark of Apantesis phalerata.

And watched a Tufted Titmouse extracting larval bald-faced hornets from this nest. 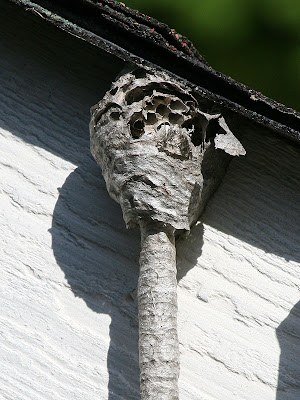 Then while out photographing some of the meadow wildflowers (next post!), I found a new-to-me butterfly: the Carolina Satyr. 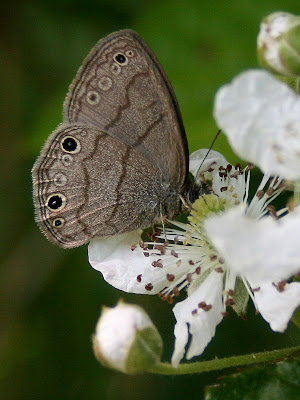 So that's five things I never saw before that magically materialized before my eyes in just a few days last weekend. Got to get back outside and keep looking...need new material for the blog.

You may remember my April battles with a pair of Eastern Phoebes determined to build a nest on our front porch. I won those battles, but they won the war. 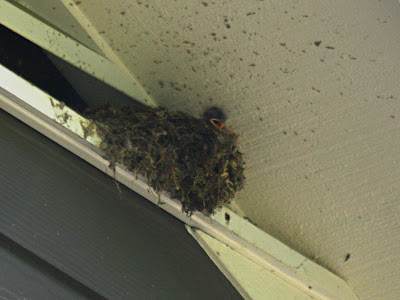 They renewed their efforts just around the corner from their first choice of site. The nest is on the gable vent of our house where I can't readily get at it. Lately the proud parents have been very busy catching flying insects to feed their little family. I was sure I saw at least two tiny heads in that nest, but the photo only shows one and that one isn't all that easy to see except for the open beak. I hope they fledge successfully and grow up and move out. I'd love to have them stay in the neighborhood, just not on our house.

Win Some; Lose Some

It's been a busy couple of weeks, but here I am. Back at Tangled Branches South where the plants didn't miss me at all (and that's a good thing). I was scrambling to get things done in the garden before leaving for a long weekend and then trying to catch up when I got back. Tallying up the wins and losses in the garden while I was gone, it looks like a tie.

Wins:
Mega-expensive Dio-Betalon row cover seems to be working fine so far. I covered a new bed of lettuce, radishes, carrots, beets and onions just over a week ago. The cover mostly stayed in place (one end had worked loose), didn't tear, and the plants are undisturbed. If this cover truly lasts several years, it will be worth the price. If not...well it won't be the first time I've wasted money.

Potatoes are up and growing strongly.

The bald-faced hornets may have abandoned the nest they began building on the garage.

A male ruby-throated hummingbird was looking for his flowers in front of the house. I planted Cupheas, Callibrachoa, and Lantana for them, but the plants are still small. Also direct-sowed Cardinal Climber (Ipomoea quamoclit) this year and the seeds are up.

We are going to have abnormally good weather for the Memorial Day weekend.

Found two newly dug groundhog burrows. One next to the vegetable garden. I hate to think of having to cover the entire garden with row covers, plastic mesh, chicken wire, etc. etc.

Neighbor behind our property is clearing at least part of the woods.

No Wood Thrushes this year? I heard one singing a few weeks ago, but just that once.

'Rose Heart' radishes bolted before we got any usable radishes. Will try again in the fall.

No Garden Bloggers' Bloom Day post. Will try to work up a very belated one this weekend. 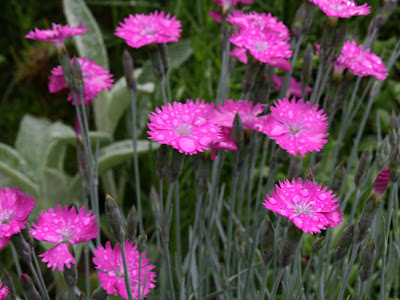 There are so many things in bloom now. Too many to let them pass by unremarked, but not enough time to remark on them properly. So I'm returning this blog, at least part of the time, to a journal format. Just notes for myself and friends and family on what's happening in the garden at the moment. 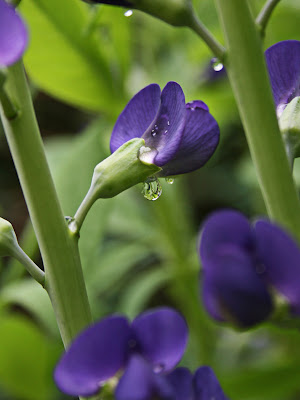 This morning we got a slight break in the weather. It's been raining on and off since Sunday and looks like more headed this way. Not great weather for photography, but this was the last chance I'll get to take pictures at Tangled Branches North until next week. 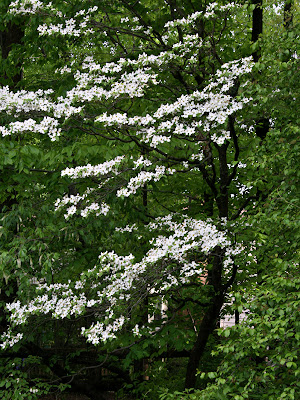 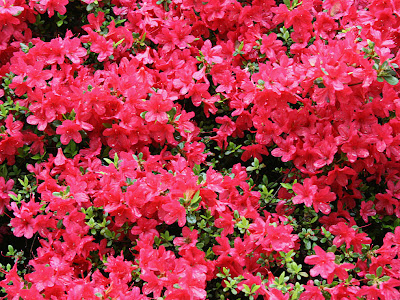 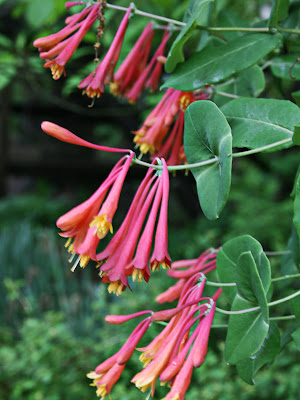 Van Houtte Spirea (Spiraea x vanhouttei)
Dianthus gratianopolitanus 'Baths's Pink' and 'Feuerhexe' (Feuerhexe is the picture at the top of this post; more-eyecatching than 'Bath's Pink' but the scent isn't as nice)
Provencal Thyme
Rosemary
Lily-of-the-Valley (Convallaria majalis; these have multipled into a solid bed on the north side of the house; the scent is almost overwhelming
Columbine 'Lime Frost' (Aquilegia x hybrida)
Eastern Red Columbine (Aquilegia canadensis; this is being eaten by some type of larvae; one plant is completely defoliated)

I finally got all the mulch off the driveway yesterday before it rained again. 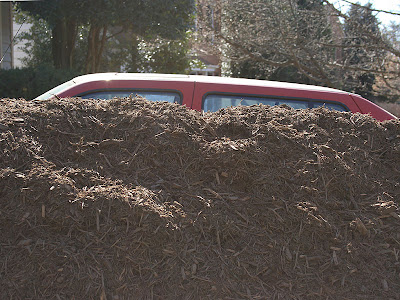 I'm embarrassed that it took almost two months to move this (above picture is from March 9), but we now have all the beds around the house covered and a good solid layer of mulch throughout most of the woods in back (not just paths as I had before).

What Ever Happend to May Day?

I want my May Pole! Are you celebrating May Day today? I mean the centuries-old customs - flowers, dancing, May Baskets, just being outdoors. I wonder if the political May Day observances dampened enthusiasm for the ancient practices? Or are people just too disconnected from the natural world these days to care?

In traditional agricultural societies, early May is considered the beginning of summer. The astronomical midpoint between the vernal equinox and the summer solstice is May 5 this year, but the Cross Quarter Day celebrations seem to occur on fixed days near the actual midpoint - May 1 for example.

I don't know of any gardening traditions connected with May Day other than gathering flowers, so after I've picked flowers for my May Basket you'll find me laboring in the garden today.
Rain + Heat = Weeds.

PS. I whined about this four years ago too, with a couple of interesting (I think) links.