This is too big a coincidence to ignore. Earlier in the week as I leafed through a stack of old magazines headed for the recycling bin, an article about Nong Nooch Tropical Botanical Garden captivated me enough that I tore out the page, intending to look it up on the internet sometime. Then yesterday morning, I discovered the beautiful travel photographs of Vladimir on Picasaweb. Guess where he visited?

Located near Pattaya in Thailand, this is an amazing garden if you like the tropical look. Or even if you don't. They have a replica of Stonehenge, for example, and some European statuary. But it was the tropical topiary and parterres that caught my attention. A world away, literally and figuratively, from my scruffy naturalistic patch of temperate zone woodland and meadow. 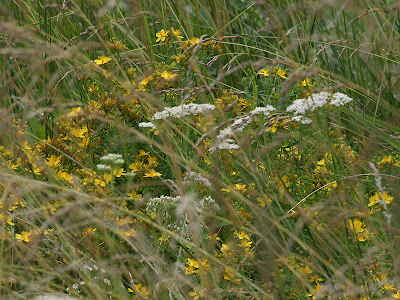 But both have butterflies. I spent some time yesterday afternoon stalking butterflies through the meadow and garden, but haven't edited all the photos yet. Next post! 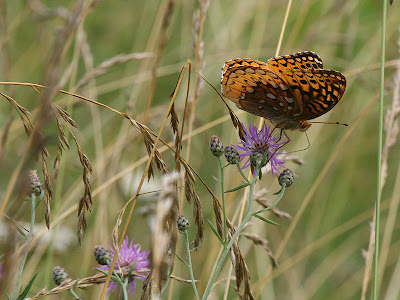 And it does look ghostly. 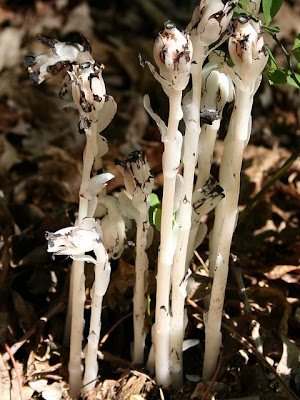 Monotropa uniflora is blooming again, in the exact same spot where I first saw it two years ago. Re-reading the post I wrote at the time I don't think I can improve on it, except to say that I didn't see the Ghost Plant last year. Too dry? We've had a very wet May and early June this year, but I think we're in for some drier weather now.

Summer Bulbs: The Decorative and the Edible

Growing your own food is very rewarding work, but it is work. Here at Tangled Branches South I've been fussing over vegetable, herb, and flower seedlings since January and still haven't gotten everything planted out in the garden yet. I think I've mentioned before that one of the reasons we wanted to live in the country instead of the suburbs was to have the space and freedom to plant a kitchen garden. And we now have space and freedom. What we lack is time. So when the mailbox started to yield up the summer bulb catalogs I was vulnerable and very susceptible to their charms. Hey, look, I could have a bunch of big nice tropical looking flowers without fiddling with seeds.

While I have been spending most of my time on the kitchen garden, I still want flowers. For the last two years, I've planted a small area next to the front porch with coleus and other things, but mainly coleus that I raised from seed. I love coleus, but something about the look of the bed was not quite right. I think it was too many dark colored leaves and not enough variety of leaf shape. Again, the bulb catalog to the rescue. How about big white leaves? Light colored enough for ya? Yeah...Caladiums...that's what I want. And what about some of the those Callas? Even if they don't bloom they have fabulous foliage - large, upright and splashed with white spots. 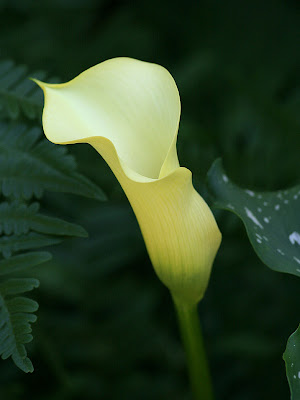 Well, the Callas did bloom, but the Caladium foliage is still a bit small. I started them inside, but apparently not early enough. Even so, they look pretty good with the self-sown 'Bowles' Black' Violas that popped up everywhere. 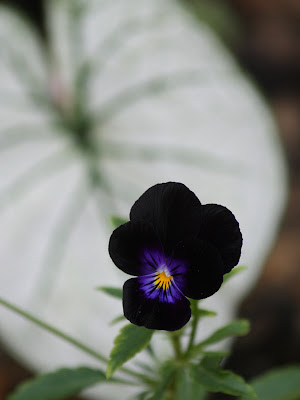 I also bought Tigridia, Sparaxis, and Crocosmia, and those are all planted away from the house and near the vegetable garden. No blooms yet on any of those. Oops, except for the one Sparaxis flower I snapped off while weeding around it. It looked like it was going to a nice color - sort of a muted red with yellow throat. Do they send up more than one flower stalk per season? I've never grown them before.

But back to the vegetable garden. I just harvested some of our very favorite summer bulbs - garlic! 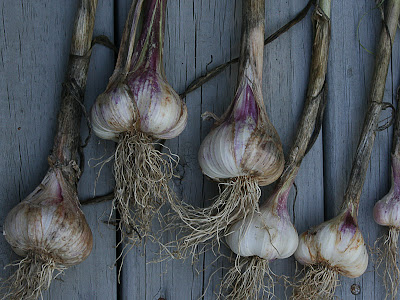 The variety is 'Red Toch'. The flavor is on the mild side, at least while fresh. I'll be curious to see if the flavor matures as the bulbs cure. I planted four varieties of garlic last fall - three of them new to me. 'Red Toch', 'Korean Red', and 'Silver Rose' are the new ones. 'German Hardneck', I grew in 2008 as well. Hoping that 'Silver Rose' is similar to 'Nootka Rose' which was the best keeper I've ever grown. Bulbs of 'Nootka Rose' were still sound and usable well into May. I wish I had replanted some of it last fall, but didn't know at that time how well it was going to keep. Now I know. I planted a few cloves of it this spring, but the plants are rather small and spindly.

Another new-to-me summer bulb from the vegetable garden is the potato onion (Allium cepa var. aggregatum). I dug the first one over the weekend and liked the flavor, but still don't feel that I quite understand how to grow them. What I've been able to glean from internet research is that if you plant a large potato onion bulb in the fall, the following summer you will get a cluster of small bulbs from it. If you dig these up, cure them, and replant in the fall, you'll get large bulbs the next summer. In order to keep the variety going in your garden, you need to fall-plant some small bulbs which will make large bulbs for use in the kitchen and some large bulbs which will make small bulbs to replant to grow into large bulbs the second summer.

I also have 'Yellow Moon' Dutch Shallots, which may or may not be the same thing as potato onions. These were planted in the spring and are growing well. It is unclear to me whether/why spring planting is better or worse than fall planting, but I was only able to obtain these shallots in the spring.

And I have still more perennial onions - Egyptian Walking Onions and White Multiplier Onions, but I have more questions than answers about those and think I'll save them for a future post.

If anybody has experience with any kind of perennial onions, I'd love to hear about your methods for growing them.

Looking out over the garden at Tangled Branches North, I see a great deal of green. Not many other colors. It's been raining a lot here lately and the perennial flowers are much later than previous years, but you should see the fat & happy foliage! I didn't get my pictures taken for Garden Bloggers' Bloom Day, but here are the lists of what's in bloom at Tangled Branches North & South. 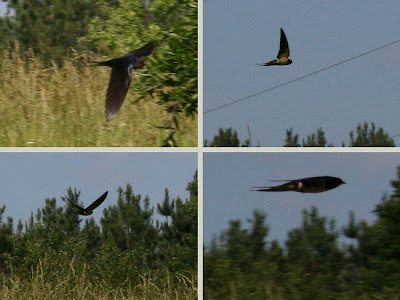 Is this a Barn Swallow? I think so, but would like to be sure. If I'm correct, the identifying field marks are the orangish throat and belly and the long, forked tail. I've never seen one before, at least not one that I got a good look at, and even here I wouldn't have had a good look without the camera. 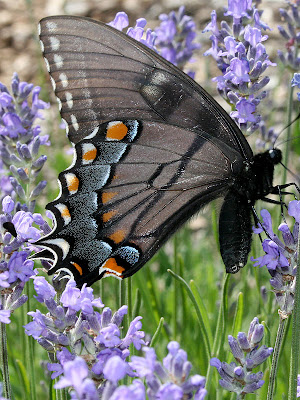 A dark Tiger Swallowtail was feasting on the 'Munstead' lavender in the kitchen garden, and while they're nectaring they're much easier to photograph. So I got the camera with the lens I use for closeups and started stalking the butterfly for a good shot. I was soon distracted by a dark bird soaring, swooping and diving over the garden and the meadow beyond.

Hey, it's some kind of swallow. I should take a photo.
Yeah, but this is the wrong lens. You won't get anything worthwhile.
But if I don't try, I won't have anything.

So I switched the camera to Sports Mode and tried first to just catch the bird in the frame and then to pan with the bird as best I could. It was FAST. I got a lot of blurry shots and a few where you could tell there was a bird in the photo. And from those photos, I can see there is a long, forked tail and an orangish underside. Virginia Bird Watching says "the barn swallow is the only American swallow that has a true "swallow tail", with an elongated outer pair of tail feathers."

Which, of course, is where our "swallow tail" butterflies got their name. 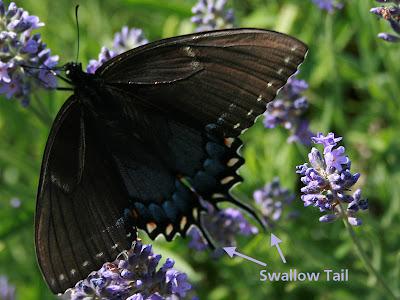 I've always liked plants with whorled leaves. Something about that neat orderly arrangement is attractive to me. The botanical definition:

courtesy of Gray's Lessons in botany and vegetable physiology illustrated by over 360 wood engravings from original drawings by Isaac Sprague : to which is added a copious glossary, or dictionary of botanical terms By Asa Gray, Isaac Sprague

I didn't realize that verticillate was a synonym for whorled. I always assumed verticillate meant needle-like, as in the leaves of Coreopsis verticillata. 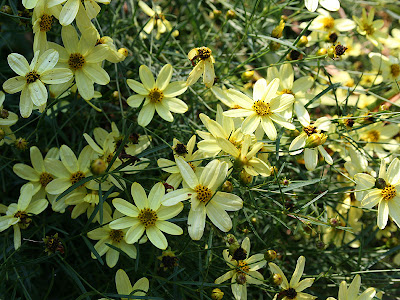 Some of my favorite whorled things belong to the genus Galium. 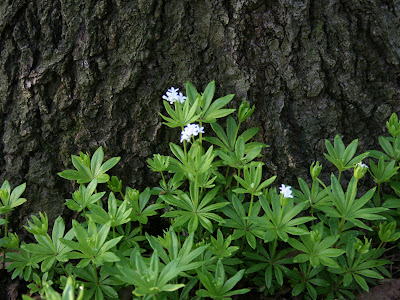 I never believed that this plant really had a sweet fragrance until I dried some of the leaves a couple of weeks ago. Yes, it does smell sweet when dried, but I'd quibble with calling the scent vanilla-like, as it is so often described.

Galium 'Victor Jones' (behind the Echinacea) 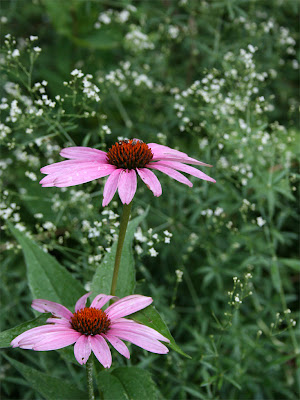 I'm not sure of the species on this one, and I'm not sure if the seller (Bluestone Perennials) is sure either. So they just called it 'Victor Jones' and left it at that.

And my new infatuation, Galium verum or Yellow Bedstraw 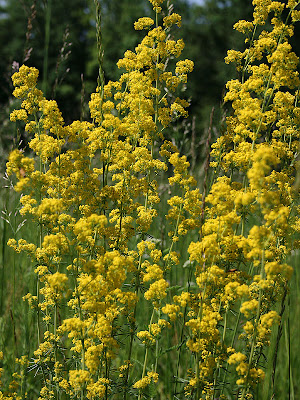 I neglected to take a picture of just the leaves, but if you click through, zoom in, and pan to the bottom of the photo, you should be able to see that they are indeed whorled. This is a wildflower (or nasty non-native weed, depending) in the meadow at Tangled Branches South. I posted a picture of it last year after I finally identified it, and it was past its prime then. This is a much better picture of the pretty, fluffy, yellow flowers. I'm thinking of digging up a piece of it and moving it to the cultivated side of things.

One more whorled wildflower, this time a real one (native plant, I mean, not an import), and just beginning to bloom a week or so ago, is Lysimachia quadrifolila or Whorled Loosestrife. 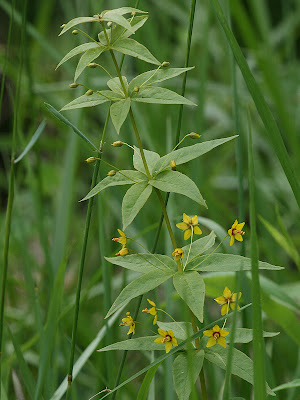