We start to see some misty, foggy mornings about this time of year and they do magical things to the meadow. 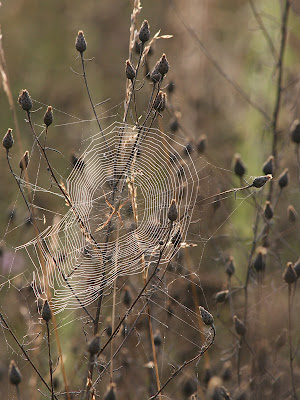 About a week ago, we had one such morning. When the fog lifted and the sun filtered through, it lit up dozens of sparkling spider webs. 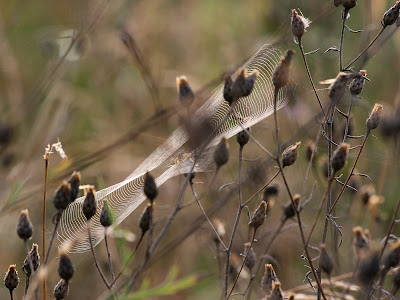 I see several types of spider here, although I wasn't trying to photograph spiders - just their webs. 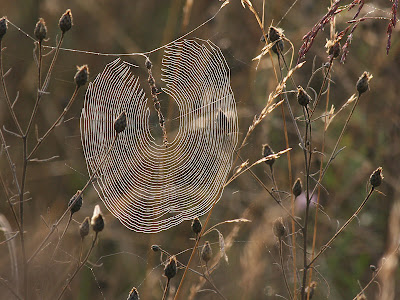 One spider was especially striking. Sheer size alone would command attention, even if it didn't have this beautiful multicolored pattern. 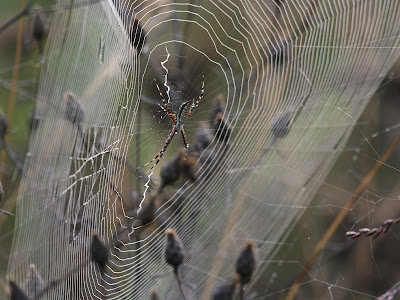 Thanks to a post by Naomi on her Nature Nerd blog, I think I've identified this as some species of Argiope.

There's so much variation in the style of webs, once you begin to really look at them. 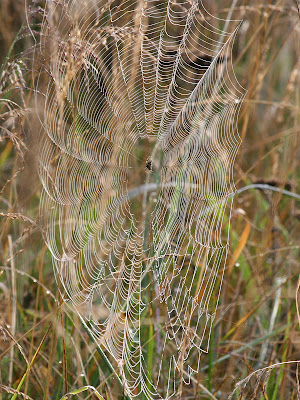 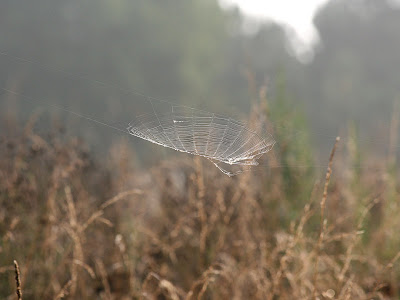 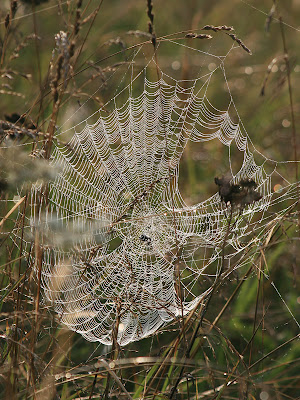 OK, this won't be a detailed review like the last one, but we really liked the large 'Virginia Sweets' tomato which was the subject of the previous post. 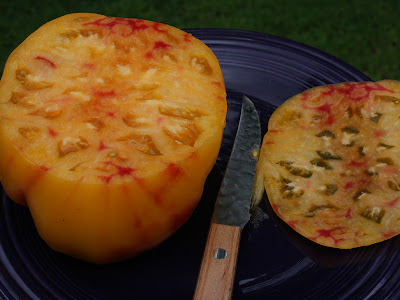 Without doing a direct comparison, I'd say the flavor is similar to 'Kellogg's Breakfast', but with this one you get all the pretty yellow/red variegation to look at too. I cut a slice off the blossom end and took a bite. Wow, you have to taste this, I said to the spouse. He agreed it was good, but then he never gets as excited about these things as I do.

For lunch, we had Indian Railways Omelet Sandwiches with one slice apiece from this tomato on no-knead sourdough bread. Those two slices were plenty; I had to cut each in half to get them to fit on the bread. In fact, the tomato was too big for my Warther Tomato Knife to slice through it in one go.

Virginia Sweets will definitely be invited back next year.

An Even Bigger Tomato

Forget about the One Ton Tomato. This one outweighs it. 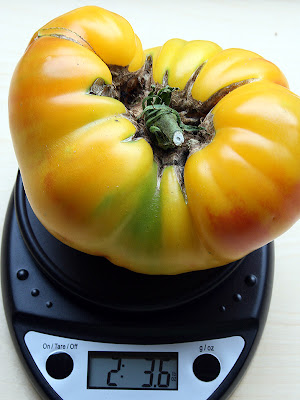 The variety is 'Virginia Sweets' and it's new to the garden this year. It looks yellow here, but is really streaked through with red when ripe. There's a little cat-facing on the other side, but I think the whole tomato is sound. I'm gonna give it another day or so before I cut into it, because I've been picking the tomatoes before they're really ripe and before the critters take an interest in them. This is the second or third one I've picked; the first was very cat-faced, but worked out OK when cut up for fresh salsa. I mixed it with many other types of tomato in that salsa, but my first impression was that it was tasty (Virginia Sweets, I mean, although the salsa was tasty too). Further tasting is planned - there are lots of green fruit on this huge plant.

I've been growing 'Kellogg's Breakfast' for several years and think it's one of the best tasting tomatoes there is. Until I tasted it, I believed that all yellow tomatoes were insipid compared to red. But I'd read glowing reviews of another large yellow tomato called 'Persimmon', most notably from MSS at Zanthan Gardens (1, 2, 3, 4), and last year decided to compare it to 'Kellogg's Breakfast'. As it turns out there are at least two different tomatoes called Persimmon and the one I grew last year may in fact have been 'Russian Persimmon'. I thought it was just OK in the flavor department, but the fruits were gorgeous to look at.

So this year I bought seeds of 'Persimmon' from Southern Exposure Seed Exchange. The plants grew well at the beginning of the season, but during the cool, rainy early summer they started to develop some type of leaf spot disease. All 14 of my tomato varieties show the disease to some degree. I haven't tried very hard to diagnose the problem, but it may be bacterial speck. It begins as small brown spots and eventually kills the entire leaf. 'Persimmon' was one of the worst-affected plants and is now almost completely defoliated with just a few green leaves at the top. 'Kellogg's Breakfast' was infected later and has lost much foliage, but is still growing vigorously.

'Persimmon' set only 5 tomatoes, all approximately the same size. Of these, I picked three while semi-ripe and left two on the plant. Those two were chewed in half by some critter just as they were beginning to color up. So I've only got three to taste.

'Kellogg's Breakfast' has yielded 6 or 7 tomatoes so far, including one very large one, with more green fruit on the plant. Some of those are showing sunscald, however, due to the loss of the lower foliage from the leaf spot disease.

For the direct taste-off, I selected one fruit of each variety as nearly the same size and degree of ripeness as I could. 'Persimmon' is on the lower left and 'Kellogg's Breakfast' on the upper right. 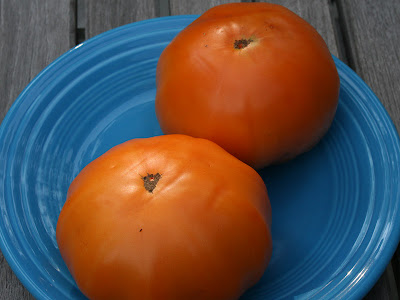 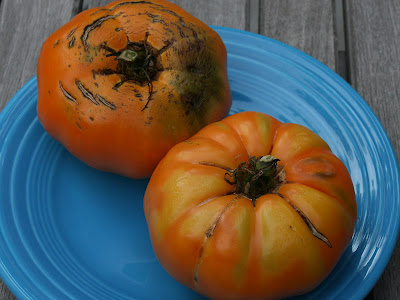 With the top sliced off, neither one of these particular specimens displays the irregular arrangement of seed chambers commonly seen in beefsteak tomatoes. It was more evident at the blossom end, but I didn't take a picture. 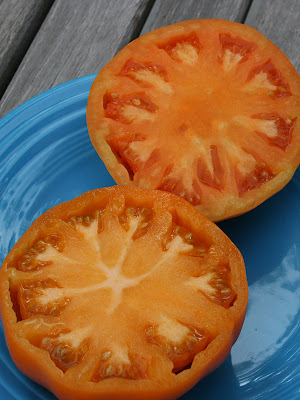 I wanted to be as fair as possible when comparing, and arranged a blind taste test with my spouse and myself as judges. In everyday life this is the only audience I have to please in the kitchen. I cut up the tomatoes into similar size pieces and placed them into identical bowls with a label on the bottom. It was easy to disguise the identities of the tomatoes from my spouse. He didn't see which tomato went into which bowl. The plan was for him to rearrange the bowls after I filled them, so that I wouldn't know which was which. No good. Having done the growing, the picking, and the processing, I could see the difference even though I tried to make the bowls appear the same. So, I put both bowls on a plate and rotated it round and round and round with my eyes closed. 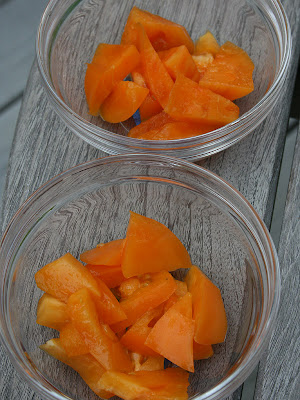 With eyes still closed, I tasted the first one. Oh, that's 'Kellogg's Breakfast'. To my mind, it has a great balance of sweetness and tanginess delivered in a very meaty, mouth-filling bite. I tasted the next one. Similar in some ways, but much more tart. I perceived the taste as more "thin".

Well, that was Judge 1. What did Judge 2 think? He preferred 'Persimmon', saying it had a little more flavor. I couldn't get any greater specificity from him.

So, it looks like I'll be growing them both for some years to come. I'll be very interested to see how they compare in a year with more-typical weather. I feel that any judgments of any plants this year are bound to be distorted by the very unusually cool and wet early summer. It's lately turned warmer and drier, by the way.

And what became of the rest of those tomatoes? A delicious salad for dinner. Sliced tomatoes topped with 'Mexican Cinnamon Spice' and 'Sweet Petra Dark' basils, sea salt, fresh ground black pepper, and a drizzle of good olive oil. 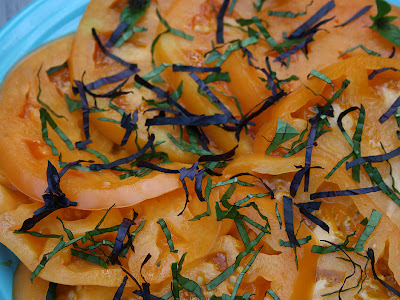 Late again, but I've been busy. 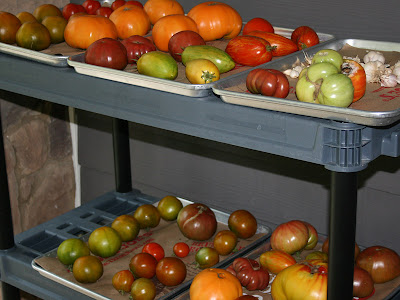 The weather forecast was wrong every day last week. They kept predicting rain, sometimes a lot of rain, and I worried about the semi-ripe tomatoes cracking after taking up so much water. Turns out I needn't have worried (because it didn't rain), but I picked all the tomatoes that were showing any color at all. The edible plants have been taking up all my gardening time. Not that this is a bad thing, but blogging and other things have faded into the background.

But we do have flowers. Still mostly annuals at Tangled Branches South, and some of these have seen better days, but technically in bloom. The list is the order in which I wrote them down as I was walking around trying to make sure I included everything. 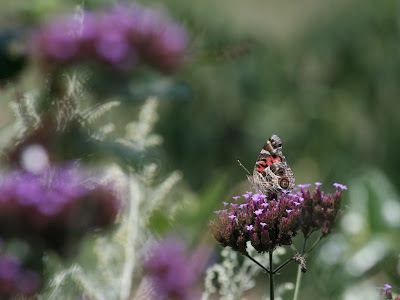 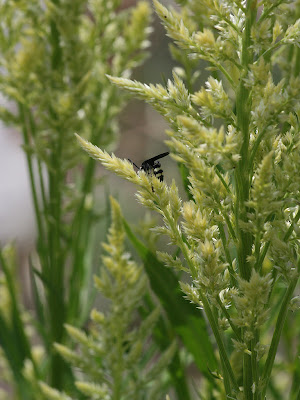 Helianthus 'Claret' (must have more sunflowers next year!) 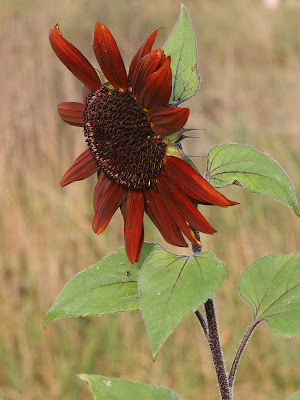 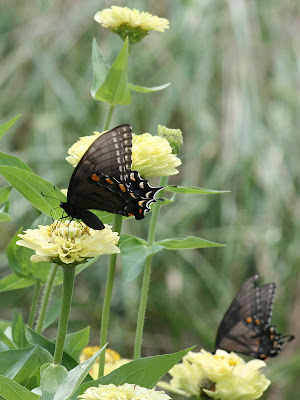 Next post: the tomato taste-off between Persimmon and Kellogg's Breakfast...

Are we having a big-tomato contest this year? 'Cuz I think this could be a contender. 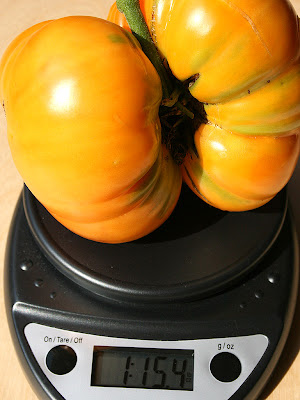 That's almost 2 pounds of 'Kellogg's Breakfast', or 1 pound and 15.4 ounces for you precise types. A mere factor of 1000 away from a One Ton Tomato.

I know that at least one other garden blogger has heard the Michael Nesmith version of Guantanamera aka One Ton Tomato. The video below doesn't have the original video footage, but the audio sounds like I remember it when I saw it on Television Parts.

How do I know that at least one other garden blogger knows of this song? Because, while searching for original video footage, I found a comment by Annie in Austin on Chigy's Gardener's Anonymous blog about it.

If they had the internet back in the dark days of 1985 Michael could have looked up the lyrics in seconds, or even watched a video with subtitled lyrics.

But back to my tomato. The B side, as usual, isn't as popular. More than a little cat-facing here, but it looked callused and dry, so I think the inside is going to be just fine. 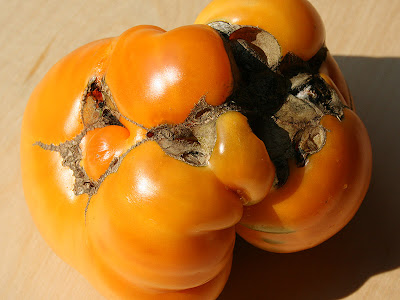 If you're wondering what I did to get such a large tomato, the answer is Nothing. Well, not much of anything. I did prune off some of the lowest side branches so it wouldn't get too unruly for the tomato ladder that's supporting it, but that's about all. Last year, I tried tomato pruning (to 3 stems) for the first time, and concluded that it wasn't worth the effort. I thought pruning might produce fewer and larger tomatoes, but I don't think I got any this large last year from this variety - Kellogg's Breakfast. One of my favorite varieties for flavor, by the way.

And I've been singing One Ton Tomato all morning... 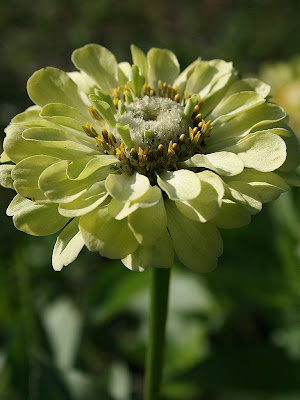 The first one was 'Envy'

And the second was 'Benary's Giant Carmine Rose' Digital photography is a marvelous thing. I probably wouldn't have "wasted" film on the center of a zinnia.