I like chickens. I don't have any, so when I go to fairs I always have to see the chickens. I wish they had other poulty at the Sandwich Fair as well, but apparently only chickens are allowed. 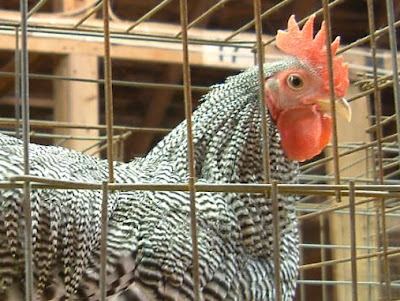 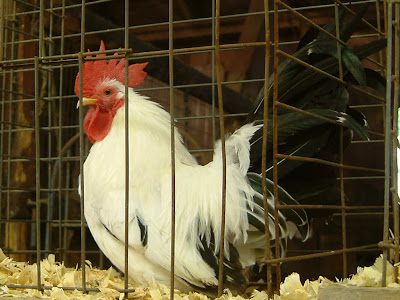 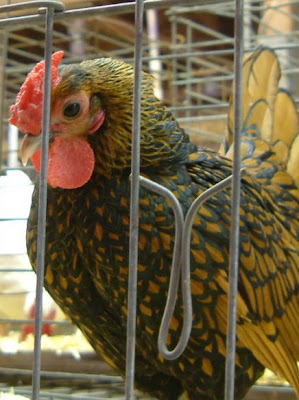 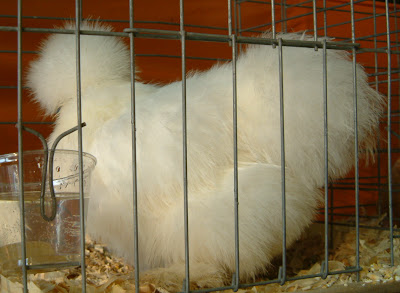 It is a chicken. Honestly. 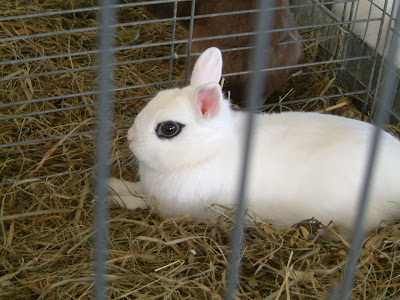 Rabbits with eye makeup? Looks like it, but they're a breed called Dwarf Hotot. The eyeliner is part of the standard.

The larger livestock is a little harder to photograph unless you get a chance to see the judging. This cow apparently won a red ribbon, whether she wanted to be in the show or not. 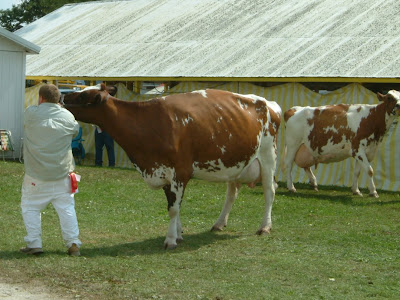 Taking advantage of today's wet weather to post the rest of the pictures I took at the Sandwich Fair last week. I decided to break this into several posts so as not to crash your browser. First up, the rest of the Horticulture and Agronomy displays. 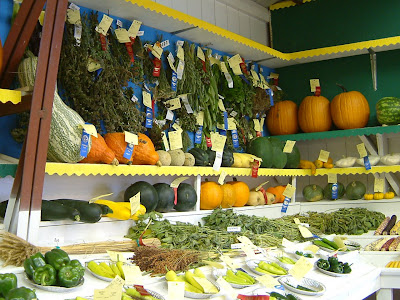 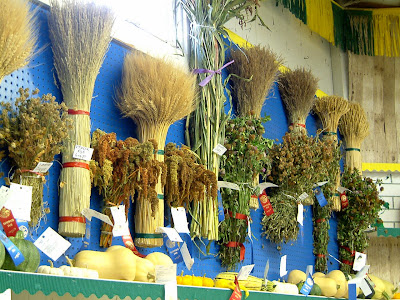 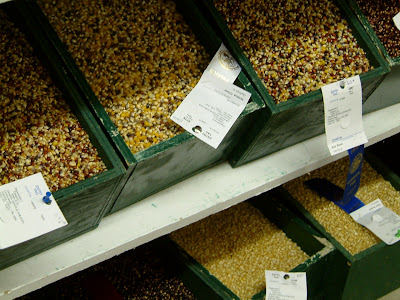 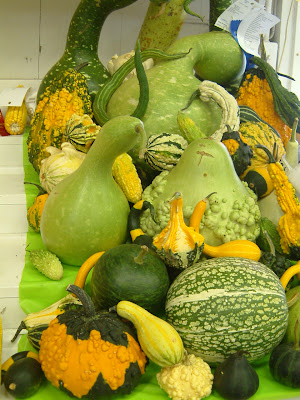 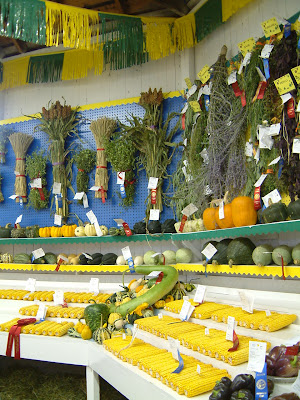 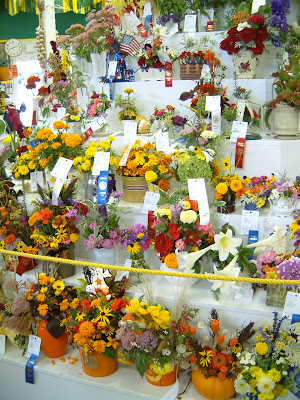 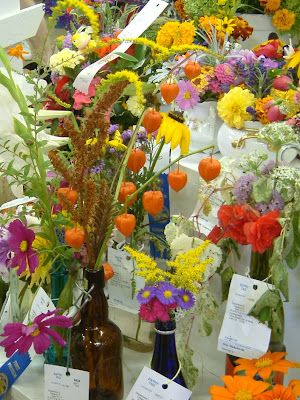 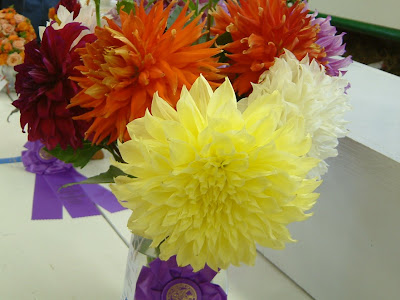 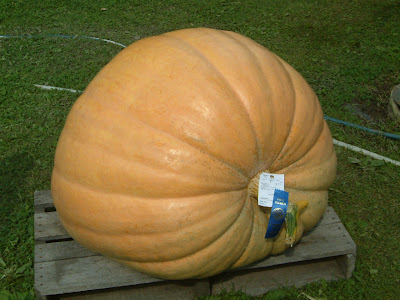 The blue ribbon pumpkin weighed something over 300 pounds, if I remember correctly.

A short selection of pictures from the Horticulture displays at the Sandwich Fair yesterday. More pictures to come when I get them edited. There's plenty to see at the fair besides horticulture: rabbits, chickens, cows, needlework, baking, canning, and antique engines to name just a few. 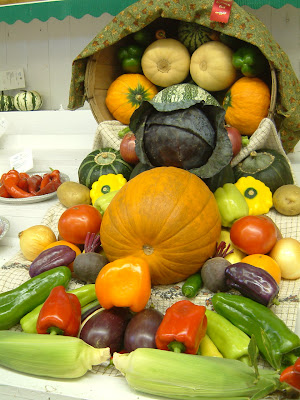 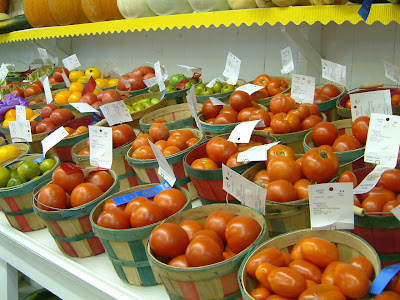 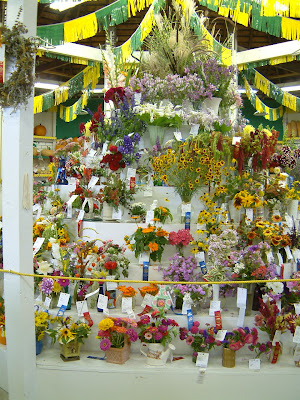 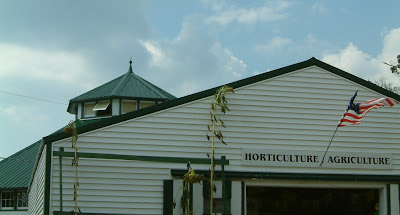 When Floral Hall was replaced in 1905, it was recognized that provision of separate areas for different types of displays would be beneficial, so $2,000 was expended for a building specifically dedicated to horticulture and agricultural products.

This original Horticulture building was an octagonal structure forty-eight feet in diameter. It housed exhibits of fruits, vegetables, grains, floral arrangements, baked goods and needlework. Having a hall specifically dedicated to horticulture has contributed further confusion to the potpourri of building names. In the minds of some, it properly became Floral Hall since it now housed the flowers. A large addition was added to this building in 1915.

In 1931, leaf burning was cited as the cause of a fire that destroyed the hall. Firemen quickly arrived on the scene, and they thought they had the smoldering fire under control; however, the tinder-dry frame structure suddenly burst into flames. The firemen's efforts were turned to saving nearby buildings.

Poets call autumn the melancholy season, but to American farmers it was the season of fulfillment and a time of rejoicing. Why else would they have chosen September as the Season of Fairs?

Eric Sloane, The Seasons of America Past

European fairs, and those of early colonial days, involved the sale of cattle and produce, but the Great American Fair became a farmer's holiday and general exhibition where prizes were given for products and handiwork of the community.

The downfall of the old-time American agricultural fair to the level of the modern American carnival is regarded by many as a national disgrace which belittles the institution of farming. The introduction of a circus midway has made the agricultural exhibits only a side show to the fair, and many of America's oldest fairs have degenerated into collections of barkers, salesmen, freak shows, Ferris wheels, and "girly shows." The farmer's carnival of today is far removed from the institution it was a century ago.

Well, yes, but the agricultural side of the fair is still important in the Midwest, and that's why I'm traveling there to see it.

I'll have full report later, but in the meantime you could read a general history of agricultural fairs in the 19th century, or the history of the Sandwich Fair.