Most of the year this Viburnum sits quietly at the edge of the woods blending in with the greenery in the summer and the bare branches in the winter. But it has brief moments of glory twice a year. I love the way the pleated leaves unfold in the spring. And in fall, it does this: 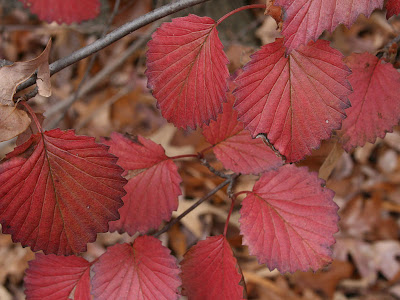 This is a wild plant, by which I mean that I didn't pay for it or plant it. It was just there at the edge of the woods at Tangled Branches North. Early on, I thought I had identified it correctly as Arrowwood Viburnum (V. dentatum) and that was that. Oh, but things are rarely that simple in plant taxonomy and this innocent little plant is a good example of just how complicated the business of assigning names can be. Our taxonomic frenemies have split the one species - Viburnum dentatum - into several botanical varieties. Why botanical varieties and not subspecies? Good question. I quote from the abstract of a paper titled "IMPLICATIONS OF THE EQUIVALENCE OF SUBSPECIES AND VARIETY, AND OF THE IRRELEVANCE OF FORMA":

Subspecies and varieties are theoretically and practically indistinguishable, but both are currently used; and the choice relates more often to the geographic origin of the taxonomist than to the biology of the plants.

Glad we cleared that up.

Further, some plants which were formerly known as botanical varieties of Viburnum dentatum have been promoted to separate species. My plant may be one of those. The Digital Atlas of the Virginia Flora says that a botanical variety named Viburnum dentatum L. var. lucidum Aiton is present in Fairfax County. But wait, the USDA Plants database says that Viburnum dentatum L. var. lucidum Aiton is a synonym for Viburnum recognitum, its true and proper name. Then they go on to list four other synonyms. By the way, I think that the variety name "lucidum" is a hoot, considering the tangled taxonomic mess we find ourselves in. Well maybe we could just call it Southern Arrowwood and be done with it. The USDA says that's the common name for all the plants in question here.

Unless it isn't one of the Southern Arrowwoods. Maybe it's a Downy Arrowwood (Viburnum rafinesquianum). I was browsing the catalog of Gardens North (on a tip from Kate) when this description caught my eye: "...this shrub also has outstanding fall color ... a dazzling display of golds, pinks, and reds". And they say it will grow in dry soil, which is where mine is. Duke University says V. rafinesquianum is similar to V. dentatum, and their photos look a lot like my plant.

So I don't know. It's a pretty plant and I like it and I wish to address it properly. I haven't found a key or guide to distinguishing these species, subspecies, varieties...whatever. If you know of one, please leave a comment.

Back to The Digital Atlas of the Virginia Flora, we learn that Viburnum dentatum is a "... variable species; several varieties have been named based mostly on the distribution of various types of hairs. Their occurrence and distribution in Virginia are perhaps worthy of study." They could come to my house to start.

Mid-November and I still have flowers. That's something to talk about! Now these are not robust and happy summer flowers; these are survivors. We had our first frost in mid-October and several since then, but no hard freezes yet, and so....flowers. Some of these survived because they're hardier than others, some because they're in sheltered places, and just a few because this is their season of bloom.

I've been discouraged lately by a surge in deer damage. For 3 years, they've been politely tasting in the garden, but now they've settled in to feast. And coming closer to the house to do it. I was contemplating planting some hostas next to the front porch where these cupheas are. Now I'm not sure. 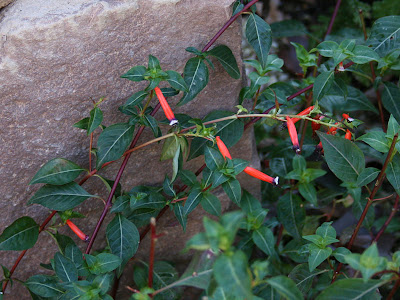 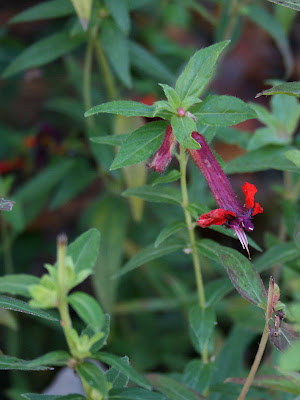 You'll notice some crudely cropped off stems in those photos - that's the work of the deer.

It's interesting that many of these survivor plants are hummingbird plants, but then again maybe that's just because I plant so many of those. I've not seen a hummingbird since late September, but keep hoping for a visit from a stray western species. 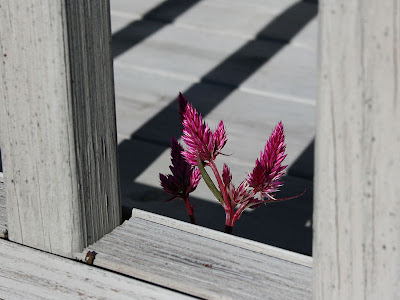 The 'Cramers' Amazon' celosia up in the vegetable garden is long gone, but the plants next to the deck are still hanging on. That's the top of one that inserted itself under the deck railing (about 4 feet off the ground).

The deer showed absolutely no interest in the lantana, by the way, and it's a hummingbird and butterfly favorite. Must remember that next year. 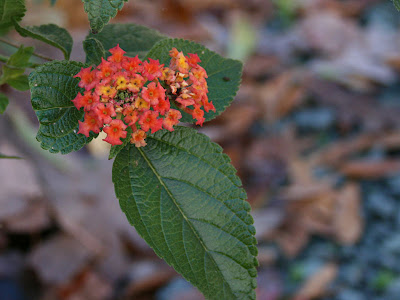 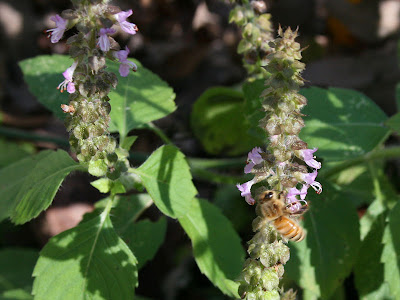 The plant was buzzing with insects in yesterday's unusual warmth.

That warmth also brought out some of my honorary flowers - the butteflies. This one is a Common Checkered Skipper. 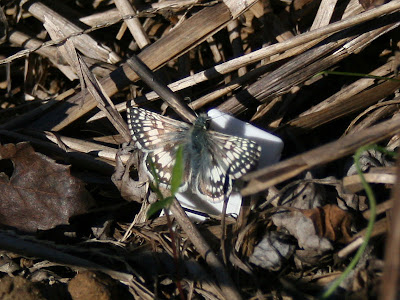 Lastly, there are a few flowers whose season of bloom is very late in the fall or very early in the spring. I have rosemary in bloom, but the photos didn't turn out. And I have really high hopes for these - the camellias. 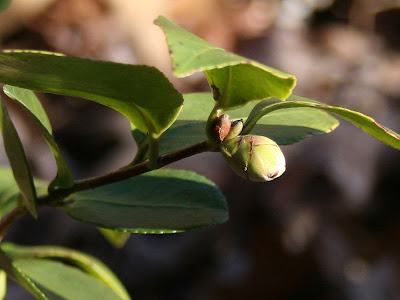 Last year I cautiously planted a few Camellia sasanqua and was very impressed with how well they survived last summer's drought followed by a colder-than-usual winter. So this year, I planted more camellias. More C. sasanqua, some C. japonica and even a C. sinensis - the camellia whose leaves I see every day in the bottom of my tea strainer. They're still tiny plants and most of them have flower buds, but no open flowers. Our next door neighbors have camellias in bloom next to their porch (should have photographed those), so I assume now is when at least some of them should be blooming. Actually one of mine did bloom a few weeks ago - the tea plant (C. sinensis) - and it's setting seed. 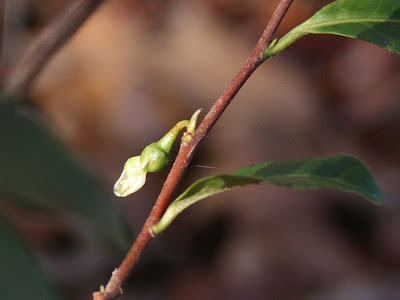 As usual, I'm a day late for Garden Bloggers' Bloom Day, but if you haven't been there already then head over to May Dreams Gardens and see what else is blooming on the internet.