While tethered to the computer slaving away at end-of-the-year bookkeeping, I heard the unhappy sound of a bird hitting the patio door. Must have been a big one, I thought.

Bigger than I imagined. When I first laid eyes on this, my brain couldn't reconcile the songbird I expected to see with the large brown creature I actually saw. 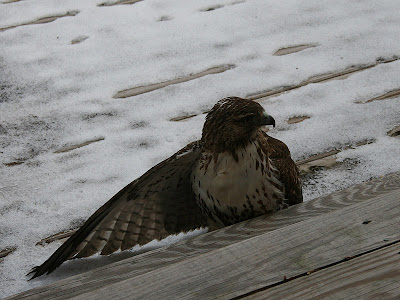 I didn't want to disturb it while it was still stunned, but I wanted a photo. And I was troubled by the sight of its extended wing and wondering how to contact a wildlife rehabilitator. I got close enough to the door to take a couple of good pictures and then... 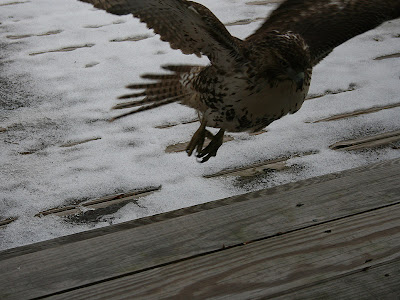 Oh no, it's headed right for the door again.

It corrected its mistake at the last minute and headed for the trees instead. I didn't see where it went, but felt relieved that it could fly.

I think it's a juvenile Red-Tailed Hawk, but I'm no expert on big birds. Anybody else have an opinion?

Taking advantage of the lull before the storm, I'm here to report that I had no flowers in bloom for Garden Bloggers' Bloom Day earlier this week.

But there are buds. 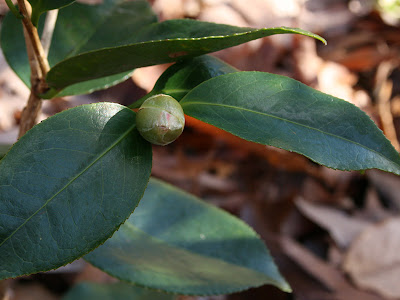 This is one of 3 such buds on a Camellia japonica, newly planted this spring. I cannot believe that I lost the label already. Its neighbors, with no buds, still have intact labels. Why?

I hope those buds survive to make flowers for a future GBBD, but today it sure feels like we're in for a long cold winter. I'm a novice camellia-grower, but I think the japonicas are less hardy than the sasanquas? But that one is still a very tiny plant, probably less than 12 inches tall, and if we get the foot of snow that's predicted it will be totally covered up and well-insulated. (I first typed insulted instead of insulated; hmmm.....)

Did she say December tomatoes? Yes! But it isn't like they came fresh from the vine today. This one has been "ripening" since mid-October when we frantically picked all we could before the frost. I think it may be the variety 'Persimmon', but in our haste we didn't bother to sort the tomatoes by variety - just dumped everything into any container we could find. We'll call it Persimmon. Or maybe Kellogg's Breakfast. Or maybe even a Virginia Sweets. One of the big yellow ones anyway. But I think it's Persimmon. 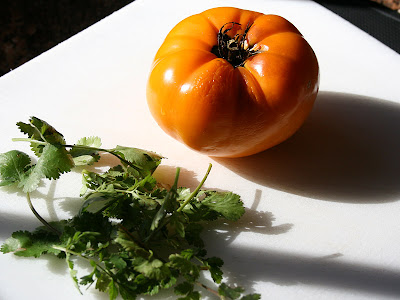 A good many of those hastily harvested tomatoes never "ripened" but this one did and we ate it for lunch today. It wasn't the same as a mid-August tomato, but it wasn't bad either. I scrounged a small amount of coriander/cilantro from the garden this morning, but unless we get a heat wave, that will be all until spring. 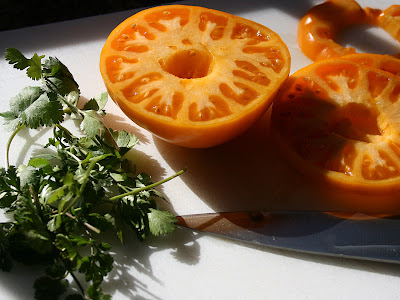 Earlier in the week I made a sort of pasta all'Amatriciana with some other varieties of tomatoes that had "ripened" off the vine but those weren't as good as today's.

With all the precipitation of the last few weeks the garden is sloshy soggy. The deer have been making their presence known by eating almost every green thing left in the garden, and now they're wading ankle-deep in mud to do it. Well maybe I exaggerate a bit, but the hoofprints are quite deep. And they've been eating things they are reputed not to like. Onions for example. So it's just as well that I didn't get my fall onions planted. The ones the deer are eating were the perennial types that I left in.

I'm content to just let the garden go for a few months. I like vegetable gardening, but it's very time-consuming. So time-consuming that I didn't write half the blog posts I had planned. Maybe I can make the clock run backwards, writing up the garden events in reverse chronological order. By the time I get caught up, we'll be back to spring and time to begin again.