Years ago, I bought a plant of lemongrass from some online vendor. It grew large in its container. I divided it and kept it indoors or in a coldframe over several winters. Then it developed some sort of rust disease on the leaves and eventually I decided not to overwinter it. I felt kind of bad about it, but not too bad, because it never really had much flavor anyway.

Then last year, I was excited to find lemongrass seeds for sale. Aha, I can have all the lemongrass I want. So, I bought them and planted them. They germinated readily and grew into large attractive plants in one season. But they didn't have much flavor.

What went wrong? I attributed the lack of flavor to the lack of a tropical climate. Well, maybe not. I probably just had the wrong species. It turns out there are two species of Cymbopogon which are commonly called lemongrass - Cymbopogon citratus and Cymbopogon flexuosus.

Cymbopogon flexuosus, or East-Indian lemongrass, is probably the one I grew from seed last year, even though it was labeled Cymbopogon citratus. Why do I believe this? Well, for one, I've learned to take that seed vendor's taxonomy with at least one grain of salt. For another, I've since learned from Joy Larkcom's excellent book, Oriental Vegetables, that

The true lemon grass very rarely flowers, so in areas where it is warm enough to grow it is propagated by dividing established clumps, replanting young portions from the outer edges. Otherwise you can plant pieces of the root. Occasionally, fresh shoots bought in ethnic markets will root if planted.

Again, aha! One of the good things about the Washington DC suburbs is the ready availability of fresh Asian fruits, vegetables, and herbs. This year I'm going to have fresh Cymbopogon citratus, courtesy of the local supermarket instead of the nursery trade. 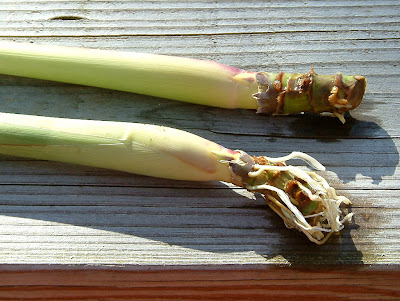 I brought these home, peeled off the outer leaves that looked dried-up and tired (and exposing more of the stem in the process), and stuck them in a glass with a small amount of water. You see here one with fairly well-developed roots and one that's just beginning to show roots. I've got six more stems in glasses on the windowsill in various stages of root formation. I bought them at intervals over the last few weeks. If you decided to try this yourself, you may have to sort through the supermarket lemongrass display looking for pieces that have a good bit of stem attached. Sometimes you'll see them with no stem attached and then you're out of luck. If you have no market with fresh lemongrass it might also seem like you're out of luck, however Johnny's Selected Seeds will send you "bare-rooted" plants (minimum of 12), but the photo looks like "bare-stemmed" plants to me (no roots). Johnny's is wonderful vendor, but I have to tell you that my lemongrass from the grocery store cost considerably less.

I'm hoping to have some good-sized tasty clumps of lemongrass right about the time this year's chile peppers are ready. I'll let you know in August or September.

Good luck with this new lemongrass! My MIL makes a wonderful dip using sour cream, lemongrass and other herbs. :)

Nancy: That sounds excellent! Do you have the recipe?