Could Central Virginia become the next big foodie destination? Last weekend the NY Times did "36 Hours in ..." and the city was Charlottesville. (There are a few mistakes in that article, and I'll note them at the end of this post.) But the farther you get from Charlottesville, the harder it is to find anything good to eat. Harder, but not impossible, and there are some surprisingly good things if you know where to look. Last weekend, freed from the garden chores by the freeze of the previous week, we visited a couple of favorite places and added two new ones.

San Marcos Restaurant, Orange
I began writing this review almost a year ago, and I'm very sorry I didn't post it sooner. This is a wonderful restaurant, although maybe a bit more wonderful when it first opened. Everything is still prepared with care and attention, but some of the better dishes aren't always available now (Sopes) and the rice has changed from a beautiful pale green cilantro-scented creation to the more usual orangy tomato-chicken broth based stuff. But it's still the best Mexican restaurant in the area. If it was in Charlottesville or northern Virginia it would be hugely popular, but in Orange it's an uphill struggle against the local tastes. Following is what I wrote on November 2, 2007:

Should you ever find yourself in Orange Virginia around mealtime, I enthusiastically recommend that you try San Marcos Mexican Restaurant. We've been watching the construction progress of this place for months now, and last weekend the "Now Open" sign appeared. Last night we stopped in and were very impressed.

It's located in a new small retail space on the south side of Orange on Rt. 15. The decor is "nice storefront", but clean and bright - no sequinned sombreros.

That's as far as I got with it. Since then, we've eaten there almost weekly. We love the Tacos al Pastor (pork with pineapple), the Red Enchiladas (red mole sauce - delicious), the Tortilla Soup (thick and creamy with cheese), the Sopes (lunch only and not always available). We really enjoyed some of the specials, but haven't seen them lately - tamales in banana leaves and posole are two that come to mind. Tortas (sandwiches) look good on the menu, but we've only tried one so far - the Cuban version - and it was tasty.

Full disclosure: I also posted a review on Google, and seconded an opinion on Yahoo!. I have no financial interest in this business, but I fervently hope they stay open because it's one of best places to eat in between Tangled Branches North and Tangled Branches South. The spouse and I can't keep them in business all by ourselves, but we try.

Higginbotham Beef and Bottle Shop, Orange
Grass-fed beef (frozen) and a nice selection of wine with a few beers on the side. What more could you want? We haven't tried too many different things here - mostly ground beef and steaks - but we've been happy with everything. The sirloin steak was particularly good.

Retreat Farm and Village Depot Store, Rapidan
We just found out about this place, and haven't actually tasted anything we bought, but we were impressed with the selection. We bought a boneless leg of lamb, some ground lamb, a dozen eggs AND BLACK TWIG APPLES! One of my very favorite apples and not always easy to find. These weren't quite ripe yet, but I trust they'll be good in cooking. I'll post an update after we've eaten some of our purchases.

Dr. Ho's Humble Pie, North Garden
Sounds like a holdout from the 1970s, but this place makes very good pizza. Sunday was our first visit, but won't be our last. We tried the Don Juan - wild mushrooms, roasted Roma tomatoes, and three cheeses. It was loaded, but the crust held. We deliberately didn't finish it so we could try the Apple Humble Crumble, or was it Humble Apple Crumble, or...well it was good whatever they called it. An entire gratin dish of apple crisp with oatmeal, nuts, cinnamon, and big scoop of vanilla ice cream. Way too much for two people who had just eaten pizza, but we finished it anyway.

Corrections to the NY Times article mentioned above:
In item 7, Country Roads, you have to drive south (not north) on Rt. 20 (towards Scottsville) if you want to see The Waltons locale.

In "If You Go", 200 South Street Inn is an expensive dump. We stayed there a couple of years ago and were flabbergasted at the moldy decrepit room we were given. Light fixtures broken, furniture broken (literally - splintered wood with missing pieces), dangerously uneven floor, and furthermore right next to the railroad tracks, which is OK as long as no trains go by. We should have demanded our money back, but we really needed a place to stay. It's true that it's very difficult to get a room anywhere in town if there's a big event on at the university.

I think it was Ki who planted the idea in my mind. I never even tasted Hot Pepper Jelly before I made it yesterday so I didn't really know what to expect. However, the flavor I imagined was hotter than the reality of this batch. And if I had followed Ki's lead and used Habaneros I might have gotten the heat level I imagined. As it was, I intended to use 100% red ripe Serranos instead of the bell peppers plus 10 Jalapeños the recipe called for. I used the recipe from the leaflet in the Sure-Jell package (and on their website). They wanted a total of 4 cups of finely chopped peppers to 1 cup of vinegar, 5 cups of sugar and a packet of Sure-Jell. I thought by using all Serranos, seeded, I'd a have a pretty red jelly with pieces of pepper suspended in it (no seeds to ugly it up) and that surely 4 cups of Serranos, even seeded, would be enough heat. And maybe it would have been, but I only had enough Serranos for 3 cups and had to make up the final cup with ripe chocolate bell pepper plus a few assorted others. 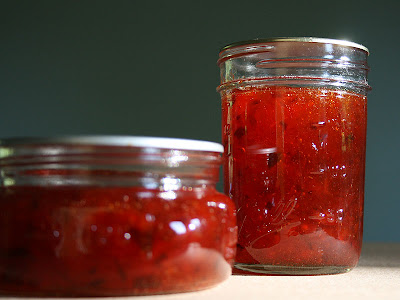 The color is pretty, just like I hoped for. Taste, well I don't know. I'm not all that keen on sweet sweet things and this has almost a cup of sugar in every jar. It does taste of peppers, with just a tiny little tingling of capsaicin. I tried it on toast this morning, and I'm not about to give up my hibiscus jam for this. I think it might have a future as an ingredient and not something to eat on its own. For lunch today, I mixed it with mayonnaise and coarse mustard as the dressing for a shrimp salad. I expect it would make a good base for a BBQ sauce, or a ham glaze, or maybe even for the sweetening in a mustard recipe I plan to try. Any other ideas?

posted by Entangled at 5:13 PM 4 comments