It Weighs How Much?!?

I brought the paper in this morning and said to the spouse - there's about 5 pounds of advertising there. But Indygardener actually weighed her local Black Friday ads and well...inquiring minds and all that.... 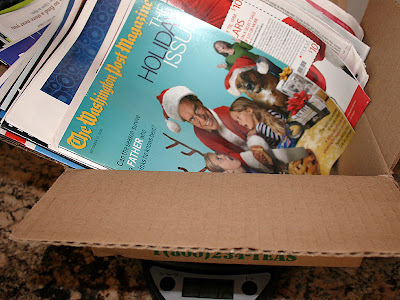 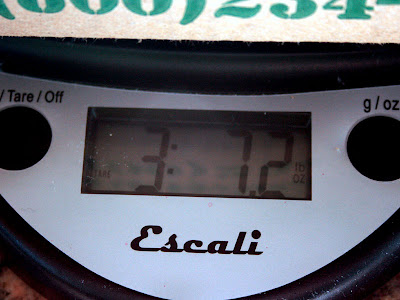 That's a bit inaccurate, however, as we received 10 copies of one ad. 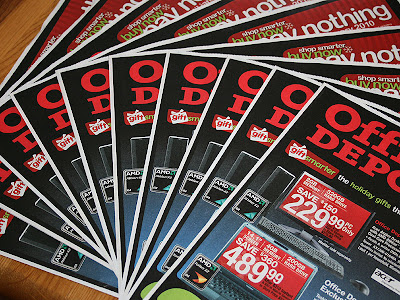 Happy Thanksgiving to all who celebrate it today!

The Flavor of Beets and Chard

With the onset of colder weather we've noticed a major change in the chard in the garden. It now tastes good. I planted chard for the first time this spring and we kinda sorta liked it, just as long as it was a relatively minor ingredient and heavily flavored with something acidic or spicy. It was the earthy taste, the same one present in beets, that put us off. But now...now that earthiness has faded into the background and it just has a sweet leafy flavor. I could almost imagine eating it in a salad.

So it's probably something to do with the weather (or decrease in sunlight?), but why? Well, I'm not there yet, but I've learned the reason for the earthy taste. A chemical known as geosmin is to blame. It's also partly responsible for stinky municipal water. But it is uncertain whether the geosmin inherently belongs to beets/chard, or if it comes from microbes in the soil.

Folk wisdom tells us that many vegetables taste better when harvested in cooler weather and increased sweetness is almost always mentioned, but so far I've been unable to find any scientific studies to back this up. So perhaps the plants are producing/storing more sugar and that masks the taste of other flavor compounds? Or if the earthy flavor is due to microbial activity in the soil, perhaps that activity decreases in colder weather? Or both?

I also learned this morning that the red and yellow colors of beets/chard are due to a somewhat rare class of compounds known as betalains. Somewhat rare because they are only known to occur in a handful of plant species. There are up to 28 different betalains responsible for the various flamboyant colors of 'Bright Lights' chard. And those lovely colors would be reason enough to grow it even if it does sometimes taste of geosmin.

The kale in the garden is sweet and delicious after our recent cold weather, so I picked a batch on Sunday afternoon and cooked it Tuesday evening. Indian recipes are the default method for cooking vegetables here, but I don't see too many (any?) published recipes for kale in Indian cookbooks. But I reasoned that the flavor could stand in for any cabbage-y type thing in a basic recipe for sauteed mixed vegetables, so I created the following based on Gobi-Aloo-Saag (Cauliflower-Potato-Spinach) from Quick Vegetarian Curries by Mridula Baljekar. Quick is a relative term - most Americans wouldn't think of these dishes as quick. And there's more than just curries here - a quick glance through and I find Pakoras, Rice, Bread, Raitas, and Desserts. Anyhow, here's what I made:

Boil 1 lb. potatoes; drain, peel and chop into approx 3/4 inch cubes.
Remove and discard large midribs from 6 to 8 oz. kale (I left the small ones in), and chop the leaves coarsely (about 1 to 2 inch pieces).
Remove leaf stalks/midribs from about 8 medium-large leaves of chard. Slice the stems thinly crosswise and chop the leaves coarsely.
Slice vertically one medium onion. Mince 3 cloves of garlic.

Heat 3 tablespoons peanut oil in a large deep saute pan. Add 1/2 teaspoon black mustard seeds. When they start to pop, add 2 dried red chiles and 1/2 teaspoon ground turmeric. Stir once and add sliced onions. When the onion begins to brown, add 1 teaspoon ground coriander, 1/2 teaspoon ground red chile (or to taste), and minced garlic.
Stir a few times, and add kale, chard and chard stems. You may have to do this in stages because all the leaves may not fit in the pan before they're wilted. Once you have all the kale and chard in the pan, and they've wilted down a bit, add about 1/2 cup canned chopped tomatoes, the potatoes, about 1/2 teaspoon salt, and about 1/2 cup water. Cover and simmer until kale is cooked through.
Now, the original recipe called for 5 fluid ounces of single cream to be added at this point. I didn't have any (half and half, or table cream), but did have some Mexican crema in the fridge. So I added a few spoonsful of crema, thinned with water to a flowing consistency. Add 1/2 teaspoon garam masala (I used Penzey's Punjabi Masala), and just about a teaspoon of butter. Stir and cook until the cream/crema is heated through and the butter is melted. Taste for salt. The original recipe called for 1 teaspoon salt, but I usually start with half the amount and add more at the end if the dish tastes flat. (Also, the crema was quite salty.)

That's it. This amount was enough to serve 2 people as a main dish with ample leftovers.

posted by Entangled at 3:52 PM 1 comments

You know how lentil soup can be kind of heavy and stodgy? What would you say to one that isn't? Madhur Jaffrey makes a lentil and shrimp soup inspired by a Filipino dish of mung beans and shrimp - she's written it up in her excellent book, Madhur Jaffrey's Cookbook. I changed it a bit to suit the ingredients I had on hand.

I've been trying to keep the fridge and pantry lightly stocked lately - the fridge failure made me realize that it's not all that efficient to store large quantities of perishable food. Too many things are wasted because they're second or third choice, and I leave them in storage until they go bad.

I had some chicken wing tips in the freezer, cut off and saved the last time I broiled chicken wings. There's no requirement that you must make a huge batch of chicken broth - you can make a very small one with just a few pieces of chicken leftovers, a small amount of water and a few seasonings.

And there was some fresh salsa leftover from the previous night.

Half a bunch of cilantro (store-bought, sad to say).

And about a third of a bag of lentils in the pantry.

I always have onions, garlic, limes, and olive oil on hand.

The only thing I needed to buy was shrimp.

My adaptation from Madhur Jaffrey's Cookbook, Lentil Soup with a Flavor of the Philippines, p. 219:

Chop 1 medium-large onion finely. Heat a spoonful or so of olive oil in a large saucepan (I used my 3.5-quart "everything" pan). Cook the onion until it starts to brown. Add 3/4 cup sorted and rinsed lentils, and 4 cups chicken broth. Cook 20 minutes and taste for salt, add if needed. Continue to cook until lentils are cooked through.

Meanwhile shell, devein, and slice lengthwise 1/4 lb. medium size shrimp. Chop 3 cloves garlic finely. Heat a few spoonsful of olive oil in a frying pan. Add the chopped garlic and stir it around for a few seconds until it smells good and is starting to brown. Add the sliced shrimp and stir until just cooked through. Remove shrimp to a plate (leaving the oil and as much garlic as possible in the pan). Sprinkle the shrimp with salt and pepper. Add leftover salsa to the frying pan. If I didn't have leftover salsa, I'd use about a cup of chopped tomatoes and chiles (Ro-tel would be good). Cook and stir until the liquid is reduced somewhat and add the whole contents of the frying pan to the lentils in the saucepan. Reserve one half shrimp as a garnish for each serving and add the rest of them to the saucepan. Cut one very thin slice of lime for each serving. Chop or tear apart some cilantro leaves and sprinkle them on top of the soup. Taste - you may want to add salt, lime juice or pepper.

To serve, ladle soup into bowls. Top each with a slice of lime and place a piece of shrimp on top of the lime.

The tomatoes, garlic, chiles and lime really brighten up the flavor of the lentils. I'm defintely making this again.